Maharashtra Assembly Election Highlights: BJP-Shiv Sena alliance will form the Maharashtra State Government for the second consecutive term. Decisions regarding the formation of the government to be finalized soon. 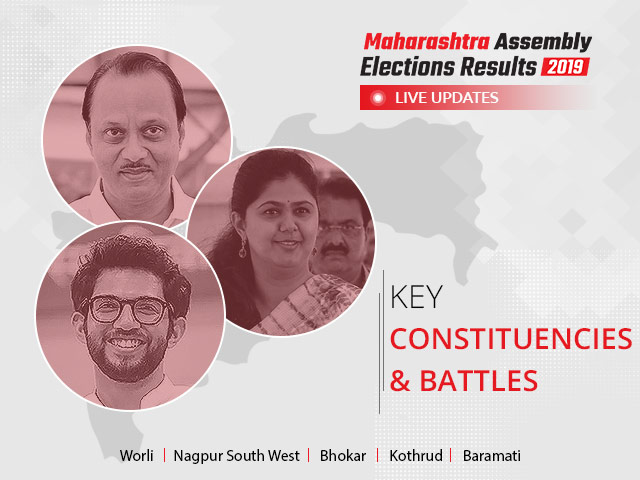 Maharashtra Assembly Election Results Highlights: The BJP Shiv Sena alliance is set to form the government in Maharashtra for the second consecutive term. Although the details as to how the alliance will work out with respect to the working of the government. Although the Sena is stern about a 50-50 formula to be incorporated in forming the government the final decision is yet to be brought out to the people.

Senas Aaditya Thackrey who was fighting his first electoral battle won from his Worli constituency which was a main highlight of the Maharashtra Assembly Elections 2019. Top candidates like Devendra Fadnavis, Ashok Chavan, Prithviraj Chavan have all won from their respective seats. Former Chief Minister Vilasrao Deshmukh's son Amit Deshmukh also emerged victorious from his Latur constituency.

Fadnavis while addressing the media from the BJP headquarters thanked the voters for trusting them. On the other hand, while addressing the media Shiv Sena chief Uddhav Thackrey said that the formula to be used for the governance of the state will be discussed between both the parties. When probed as to whether ere will be a chief minister from Shiv Sena he seemed pleased with the reporter who asked him the question. While speaking about sin Aaditya's win in Worli party chief said that both he and his wife are proud as his parents and also thanked the people of Worli for supporting him in his debut electoral battle.

Highlights - Uddhav Thackrey, Aaditya Thackrey, and Devendra Fadnavis address press conference - Celebrations underway at BJP Headquarters in Mumbai Fadnavis addresses party workers. Shiv Sena party chief Uddhav Thackrey thanks people for believing in the BJP Sena alliance.  Shiv Sena will soon sit with the BJP leaders to decide on the formula for the government to be formed in the state.

Congress Leader VB Thorat wins in Sangamer Highlights - Congress contestant V B Thorat has been declared as the winner in the Sangamner Constituency. Maharashtra Congress on its Twitter handle has come forward to congratulate Thorat. 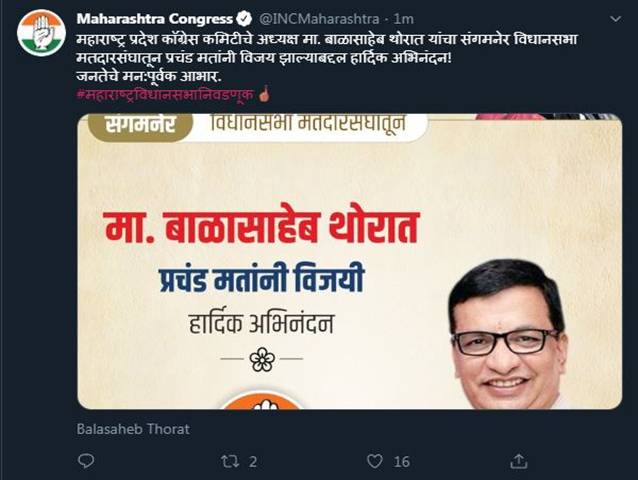 Congress-NCP candidates declared winners at Baramati and Parli Highlights - Ajit Pawar wins from  Baramati by a margin of 1.62 Lakh votes which may be considered as the highest in the state while the BJP candidates Pankaja Munde looses in Parli to cousin Dhananjay Munde.

Former Chief Minister Ashok Chavan likely to win in Bhokar Highlights- Congress leader and former Chief Minister Ashok Chavan is maintaining her lead in Bhokar with 67.81 percent of votes. NCP contestant Ajit Pawar, on the other hand, is maintaining a lead of 83.54 percentage from Baramati. BJP contestant Nitesh Rane maintains a 58.07 percent lead from Kankavli. 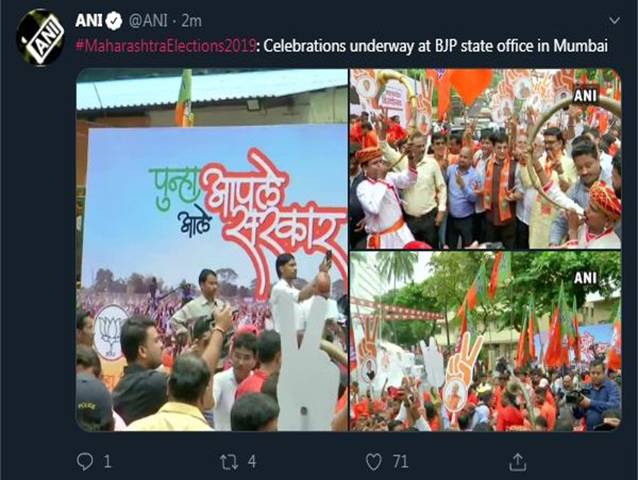 Maharashtra State Assembly Election Result 2019 - Highlights:  Leading contestants in the different constituencies - Aaditya Thackrey is maintaining his lead from Sen stronghold Worli with 33013 votes while Chief Minister Devendra Fadnavis is leading from Nagpur South West with 20350 votes.  Former CM Ashok Chavan of the NCP maintains the lead in Bhokar with 49134 votes totaling to 67.59 percent of total votes. In Maharashtra, until now the BJP Sena alliance has secured a 162 lead although individually the Shiv Sena is seen to perform better compared to the BJP.

Maharashtra Assembly Election Results 2019 - Highlights - Pankaja Munde Trailing against Dhananjay Munde: Pankaja Gopinathrao Munde is trailing behind NCP candidates Dhananjay Munde while BJP and Sena alliance is leading in the state. Chief Minister Devendra Fadnavis who is also leading from Nagpur South West is on his way to becoming the first CM in the state to come for a second term in the state of Maharashtra.

Maharashtra Assembly Elections - Live Updates @ 9: 44 AM: NCP's Dhananjay Munde is maintaining his lead in Parli (Beed) against BJP contestant Pankaja Munde. As per reports, Munde is leading by a margin of 1,654 votes as per reports. Rohit Pawar, on the other hand, is leading in Karjat Jamkhed where BJP's Pro. Ram Shankar Shinde is putting up a fight for the BJP.

Live Updates from Bhokar and Baramati @ 9: 20 AM: Ashok Chavan Leads in Bhokar: Former Maharashtra Chief Minister Ashok Chavan is maintaining a lead in Bhokar while Ajit Pawar of the NCP leads in Baramati coming as a relief for the Congress NCP alliance. BJP leading in other constituencies.

Maharashtra Assembly Election Live Updates @ 9: 05 AM - BJP leading in the state as per Election Commission Trends:

Numbers expected to change as EVM counting will commence soon although the general flow is expected to remain the same for the BJP and BJP Sena alliance in Maharashtra. The congress Tie up with the NCP is struggling in parts of Maharashtra expect for the West Maharashtra region as per trends now. NCP up while Congress is trailing behind in the alliance break up in Maharashtra.

Live Updates @ 8: 25 AM: BJP and BJP Sena leads in Maharashtra - Fadnavis government on its way back to power. Out of 74 leads BJP Sena gets 45 leads. Alliance break up shows 36 leads for BJP, while Shive Sena stands with 16 leads.  Congress secures 11 leads with  NCP securing 8 leads.

Maharashtra Election Live Updates @ 8: 18 AM: BJP and Shiv Sena alliance leading by 35 in Maharashtra with Congress NCP with 15 leads.

Live Updates Maharashtra Elections @ 8:11 AM: With 26 leads in Maharashtra, BJP leading in 21. BJP Sena tie up looks to win all 145 seats.

Live Updates @ 7:59 AM - The Battle for Maharashtra: Counting of votes to commence soon. Will the BJP-Shiv Sena alliance work its magic for the second consecutive time?

Live Updates @ 7:55 AM - Baramati Constituency: Posters congratulating Ajit Pawar and Rohit Pawar have been put up at Baramati constituency ahead of the Maharashtra Assembly Election Results.

Counting Centre Colaba Mumbai Live Updates @ 7: 45 AM: Counting of votes for Maharashtra Assembly Elections 2019 to being in 15 minutes. Preparations for the counting at counting centre in Colaba Maharashtra underway. 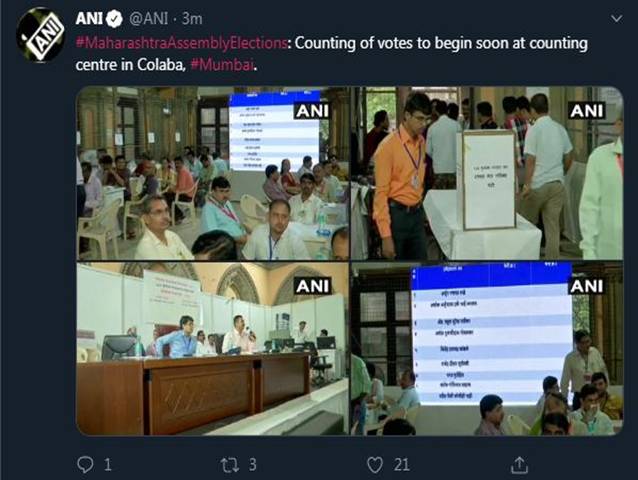 Maharashtra Elections Results 2019 Live Updates @ 7: 25 AM: Counting of Votes for Maharashtra's 288 assembly seats to begin at 8 AM. All eyes on who will form the next government

Nagpur South West Live Updates @ 7: 15 AM: Preparations have begun at the counting center for Nagpur South-West constituency, ahead of counting of votes. 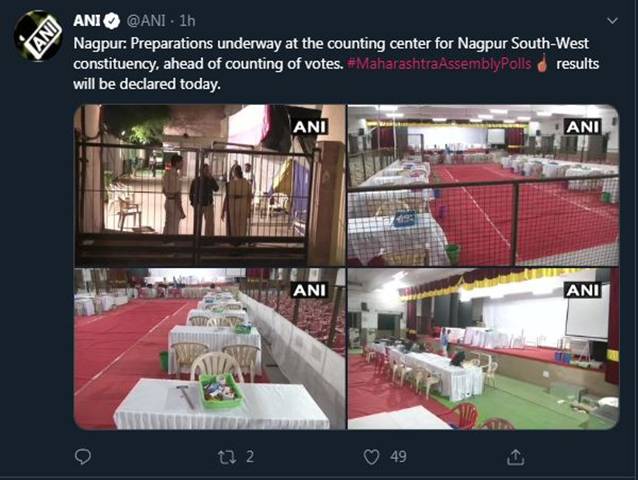 Maharashtra Assembly Elections Results 2019 Live Updates @ 7: 04 AM: Counting for 288 Maharashtra assembly seats to commence at 8 AM