After football, cricket is the most favourite sports in the world. The sport of Cricket is full of glamour and wealth, that’s why every youngster in India wants to become a Cricketer. The BCCI gives salaries to cricketers based on their performance in matches as this encourages them to play better and win acclaim for the country.

The BCCI has renewed the annual contract of 27 players for October 2019 to September 2020 period.

Grade A: These players get Rs. 5 cr. per year

Grade B: These players get Rs. 3 cr. per year

Grade C: These players get Rs. 1 cr. per year 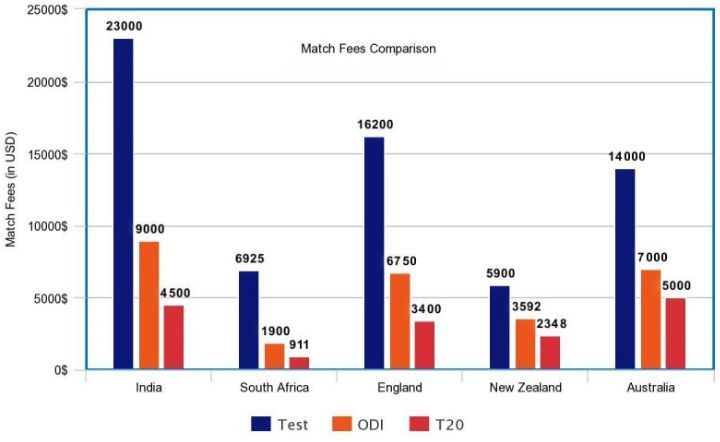 The new contract has been applied since October 2019;

How much money players get when they play a Test Match, ODI and Twenty20:- Note: The important point to be noted here is that money is given under the BCCI contract and the money paid for each match is given separately.

If a player scores a century in ODI or Test Match, he get Rs. 5 lakh as bonus irrespective of the grade to which he belongs. On taking five wickets, a bonus of five lakh rupees and on scoring a double century a bonus of Rs. 7 lakh is given to the player.

BCCI also gives performance-based bonuses. If a player scores half or full century against a top-ranked team, he may get a hike of 30-60% in his salary. It is clear that BCCI awards different bonuses based on achievements. Further, on retirement, it provides pension also

Thus the revenue figures mentioned above shows that cricket has huge money and fame as compared to other sports in India. This is the only reason that big corporate houses are much interested in sponsoring the players and tournaments related to cricket.