A quiz based on the latest developments in the business world for the 24 June to 30 June 2015 week. Read and know how well updated you are.

Q1. Which was the first Swiss steel luxury watch that was brought out by Audemars Piguet?

a) IBM
b) Adani Group
c) Wipro
d) None of these

Q3. Index-based insurance policy to cover losses incurred by orange fruit-growing farmers has been launched by?

Q4. Guess the Personality who is a famous Indian Author 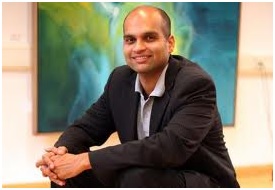 Q5. Who has been appointed as the CEO of French cement maker Lafarge's India operations?

Q7. What will be offered by Kashi Vishwanath temple in association with Shri Prakash Raghuvanshi?

Q8. What were the last three words of Gary Gilmore which made him famous in the Business World?

Q9. Which ad agency is behind the Congress election campaign with the headline “main nahin, hum” ?

a) Ogilvy
b) Dentsu India
c) Martha
d) None of these

Q10. Who is the CEO of the Smiley Company which owns the trademark and copyright over the Smiley face ?