The Central Board of Secondary Education (CBSE) has released a sample OMR sheet. In Term 1 CBSE 10th & 12th board exams 2021-22, a similar OMR Sheet will be used by the board. Check complete details.

The Central Board of Secondary Education (CBSE) has released a sample OMR sheet. In Term 1 CBSE 10th & 12th board exams 2021-22, a similar OMR Sheet will be used by the board. The board has also given some important points regarding the OMR sheet about which all students of Class 10 & Class 12 must be aware. In this article we are providing the picture of sample CBSE OMR Sheet 2021-22 and important points mentioned in CBSE Circular. 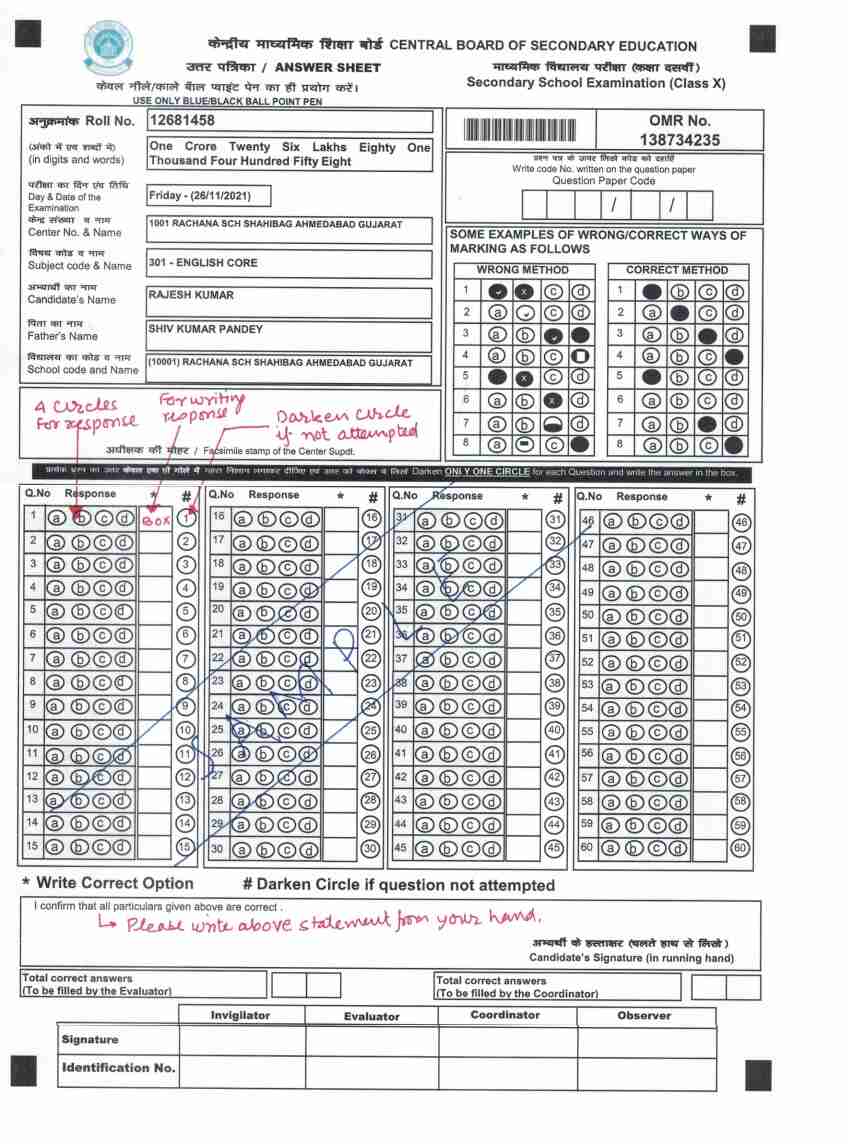 OMR is demystified by providing the following information:

⇒ Details of the candidates will be pre-filled in the OMR.

"I confirm that all particulars given above are correct" and sign in the running hand on OMR.

⇒ Only Blue/Black ball point pen is to be used for filling desired information and for giving responses.

Following are the important features of the OMR:

⇒For giving a response, 4 circles i.e. (a),(b), (c) & (d) are given in front of each question in a row. Candidates once confident about the correctness of reply should darken the circle with a pen.

⇒ After 4 circles are over, a box is given in the same row. Candidates have to write the correct option in this box i.e. a or b or cor d as the answer is.

⇒ After the box, again a circle is given ahead of box wherein the question number is also written inside the circle. This circle is to be darkened by the candidates if they have not attempted this question.

⇒ Candidates are advised that first of all they should mark the response by darkening the circle. If fully satisfied then they should write a response in a box. Purpose of giving a box is only that if any candidate wishes to change the response, the same be written in the box.

⇒ Even if a candidate is satisfied with darkening the circle, this response has to be written in the box. Candidates have to reply both in a circle and in a box.

⇒ Reply written in the box will be treated as final.

⇒ If the box is empty and the response is marked in the circle, it will be considered that the Question has not been attempted by the candidate.

⇒ If the response is given in a box and the circle is left blank, it will be considered that the Question has been attempted by the candidate.

⇒ If all the three i.e. 4 circles, box and last circle are left blank, it will be considered that the question has not been attempted.

⇒ Schools will download the OMRs in advance as per the schedule given in guidelines (to be provided by CBSE shortly).

Schools are requested that based on the information provided by the CBSE, practice sessions may be organized for the students. Before the practice sessions, teachers must also get acquaint themselves well with the OMR.

Can we use a pencil to fill the CBSE OMR sheet?

Pencil is strictly prohibited in CBSE OMR Sheet. So never use a pencil to fill OMR Sheets.

Which color pen can be used in the CBSE OMR sheet?

Only Blue/Black ball point pen is to be used for filling in desired information and for giving responses.

How can I get a PDF of the CBSE OMR sheet?

A scanned image of the CBSE OMR Sheet is available online on the official website of CBSE (cbse.gov.in). It is also available in the article above.