The Central Board of Secondary Education, CBSE conducted the first major paper of Class 10, i.e., Social Science on 30th November, 2021. The paper began at 11:30 AM and concluded at 01:00 PM. Question papers were distributed before 11:30 so that students could read the question paper nicely within the 20 minutes reading time. The paper consisted of MCQs only and it was entirely based on the Term 1 syllabus which is 50% of the full syllabus. We have provided below the CBSE Class 10 Social Science Term 1 Paper in PDF format. Answer key of the paper is also provided here which students may refer to for knowing correct answers to all questions given in the Social Science paper.

1. There are total 60 questions. These are divided into four sections.

5. Section D contains 2 Map based questions. Attempt both the questions.

7. There is no negative marking.

Given below is a screenshot of the question paper: 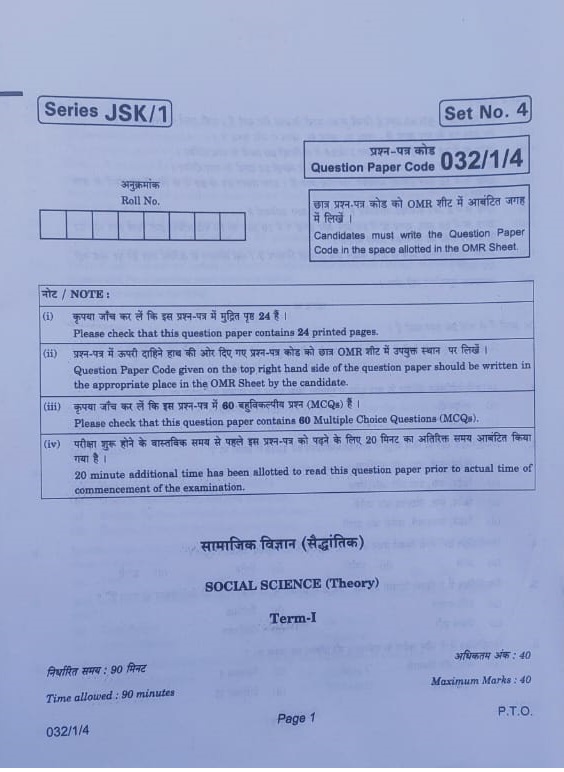 1. Industrialisation began in which one of the following European countries in the second half of the eighteenth century?

2. Which type of governments were mainly driven in Europe after the defeat of Napoleon in 1815?

3. Which one of the following group of countries collectively defeated Napoleon in 1815?

(a) Britain, Russin, Prussia and Austria

(b) Britain, Russian, Prussia and Australia

4. In which one of the following countries did the first liberalist-nationalist upheaval take place in July 1830 ?

5. Who among the following remarked "When France sneezes, the rest of Europe catches cold"? (a) Lord Byron

6. Who among the following was the architect for the unification of Germany

7. Who among the following had sought to put together a coherent programme for a unitary Italian Republic during the 1830s ?

(a) Victor Emmanuel I

8. In which one of the following states is overgrazing the main reason for land degradation ?

9. Identify the soil which ranges from red to brown in colour and saline in nature:

10. Which one of the following forces leads to maximum soil erosion in plains ?

Download the question paper in PDF from the following link: