CBSE Class 10th – Opinion on Optional Vs Compulsory Board exams

This article talks about the CBSE’s idea to make Class 10th board exam compulsory again from the next academic year, 2018. Here you will get a comparative outlook on optional and compulsory board exams for CBSE Class 10.

Taking into consideration the deteriorating quality of education and learning outcomes in schools as the major issue, the government is planning to bring an amendment to the Right to Education (RTE) Act which will allow states to conduct exams in elementary schools, and issue an executive order bringing back CBSE Class X board exams.

While the CBSE is set to return with Class X board exam from 2018, exams in elementary schools may be held from the academic year starting in 2017.

The decision of re-introducing the compulsory CBSE Class 10th board examination for the CBSE schools is receiving a mixed response from students and the education fraternity.

Jagranjosh.com has come up with a thorough analysis which let you comprehend both the positive and negative side of the move:

There are many people who claim that the grading system is the best while there are also others who say the complete opposite. Well, both the sides have a fair share of arguments to support their views completely.

The basic problem with the grading system is that it does not provide an opportunity to make the child think out of the box or freely develop their thinking about any idea or get involved with any kind of the intellectual speculation.

Still, this method is widely regarded in many of the schools across the world and is accepted as a strong and a viable medium to adjudge a child’s grasping and reciprocating ability.

What Made The Schools To Choose This Grading System?

Grading and reporting are relatively recent phenomena in education. Education in high school today, covers a lot of topics, but do not take students to the depth of the subject. Until and unless students are not sure of what the subject holds in-depth for them, they will never be clear enough to decide which subject holds interest for them. Instead of covering many subjects and not teaching much about it, the schools started teaching everything that the subject has to offer. Thus the idea of grading arrived.

Grading was considered appropriate at that time because it was well known that the distribution of students' intelligence test scores approximated a normal probability curve. Since innate intelligence and school achievement were thought to be directly related, such a procedure seemed both fair and equitable. 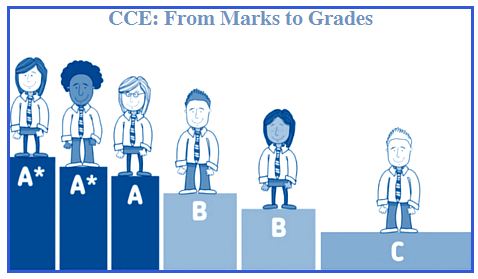 a) It has reduced stress and anxiety which often builds up during and after the examination which could have an adverse impact on young students especially in the age group of 13-15 years.

b) It has reduced the dropout rate as there will be less fear and anxiety related to performance.

c) In the past there was practice to often finish the entire syllabus much before time and follow it up with Pre-Board(s) and study leave. But after the implementation of grading system there was a greater focus on learning rather than teaching.

d) The emphasis on conceptual clarification through experiential learning in the classroom has increased since there is more time available for transaction of curriculum.

e) It has helped the learners to develop holistically in terms of personality by also focussing on the co-scholastic aspects which will be assessed as part of the Continuous and Comprehensive Evaluation scheme.

f) It has also helped the students to prepare for life by making students physically fit, mentally alert and emotionally balanced.

g) The students now have more time on their hands to develop their interests, hobbies and personalities.

h) It has enabled the students, parents and teachers to make an informed choice about subjects in Class XI.

i) It has motivated learning in a friendly environment rather than in a fearful situation.

j) It equipped students with Life Skills especially creative and critical thinking skills, social skills and coping skills which will keep them in a good stead when they enter into a highly competitive environment later on.

Now, coming to the disadvantage side of the grading System: 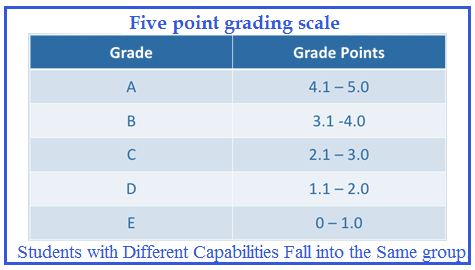 1. It doesn’t instil a sense of competition: When all that is required is a mere pass mark, we would neither have the urge to outperform others nor do we want to excel with the overall grades. The A grade speaks a lot about our calibre than a D or a F. With a D or a F, we can be only satisfied that we are okay enough in studies, which will make us lazy.

2.Grading is not an accurate representation of the performance and the knowledge gained: As we have said already, passing in an examination cannot be considered as plausible enough to declare that the same student has gained an immense amount of knowledge in the subject.

3. It is not an exact scoring system: Suppose, let us consider that the science subject is your weak point and with a tremendous effort you got an A or a C for all your attempts, which would have made a vast disparity in your sense of accomplishment. Still, the inner knowledge you have gained via these grades can be nil, as you may have learnt the subject without understanding the concept, with the sole perspective of getting an A or a C.

4. Lack of incentives: The traditional letter grading system considers that every alphabet is an inducement to perform good or better or the best. Getting a B could kindle the students to put in extra efforts to get an A and is a step closer to getting the highest marks in a class. But, the highest rank in class tag is going to do no good for the students. To get the tag, the students will only go for rote learning rather than exploring and explaining the concepts on their own.

6. The spirit of competition has reduced as the student studying moderately would not try that hard to understand everything as he knows very well that he has a scope to make a few mistakes and still get a decent grades.

7. The fact that assignments will be considered for the overall marks makes the students lethargic towards studying well for the exams as they know how much to get in the exams to pass.

The major disadvantage of grading system include the fact that students cannot be differentiated with respect to one another as more than two students with different capabilities in terms of their intellectual capabilities will fall into the same group.

Thus a teacher will not be able to know which person needs more special attention than the other.

Other Areas of Consideration:

The fact that a student scores a 100 without any mistakes and a student who scores 90 replete with several mistakes grouped together can make the centum holder to get de-motivated. This will diminish the spirits of the hard worker to get mediocre grades, as he or she will know that irrespective of the grades, they are going to be placed in the cream students section only.

Thus, these are the unfair advantages that this system poses while considering it as an able system to motivate the students in order to perform better.

So, is the Grading System a Better One?

Even though there are several disadvantages of grading system it has removed several disadvantages of the marking system. As a recent survey has shown that with the advent of the grading system the number of students who give sufficient importance to education has reduced drastically as this notion stems from the fact that the grades are a fleeting sort of thing and are able to fetch only in the short-term and have no use in the long run. Especially when these students appear to college entrance examinations with these grades and a nil amount of knowledge, these grades will not speak on behalf of them.

Grades without knowledge, is like a batsman going to a cricket field without a bat to play a cricket match. In the same way, schools should also come forward to implement some changes in their designed curriculum to insert some changes that make the students to be proactive in order to learn in a meaningful way so that the concept remain with them all through their life.

Grades or marks form a big influential element in a student's life. Grades benefit education in the best possible interest of a student and his or her learning ability. It has largely eliminated the drawbacks of marking system by offering its own benefits. Thus grading system gives consistency and illusion of fairness. It also gives permission in screening the students according to their performance relative to their peers.

Those who are in favour of this method of assessment also argue that it will centre the focus on the actual learning environment, and make it better, thus facilitating better understanding for pupils. However, the process of awarding marks against criteria is internalised and not so explicit. The holistic marking schemes are time-honoured and used in many areas where judgement is required and are considered equally valid. In the end all marking requires a judgement.