This article provides you the revision notes on Class 11 Chemistry: Chapter- Structure of Atom. Some of the important topics covered in this part are: Bohr’s model for hydrogen atom, Dual behavior of matter, Heisenberg’s Uncertainty Principle, Quantum Mechanical Model of The Atom, electronic configuration of an atom. 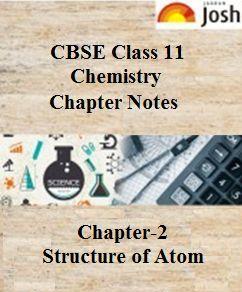 This article provides you the revision notes on Class 11 Chemistry: Chapter- Structure of Atom, to give you a quick glance of the chapter. This article is a continuation of the revision notes on Class 11 Chemistry, Chapter- Some Basic Concepts of Chemistry, Part-I. In Part-I you got to learn about atom and its subatomic particles, Rutherford’s nuclear model of atom, Thomson’s model of atom, electromagnetic radiations and electromagnetic spectrum.

Topics covered in this part of chapter notes for ‘Structure of Atom’, are:

These quick notes are prepared strictly according to the latest CBSE syllabus for Class 11.

Key notes of the chapter are:

Postulates for Bohr’s model are:

1. Electron in hydrogen atom moves around the nucleus in circular path of fixed radius and energy. These paths are called orbits or energy levels.

2. As long as an electron remains in a particular orbit, it does not lose or gain energy and its energy remains constant.

4. Frequency of radiations emitted or absorbed when transition of an electron occurs, is given by

5. An electron can move only in those orbits for which its angular momentum is an integral multiple of h/2π, i.e.,

Some more assumptions of Bohar’s model are:

1. The radii of the stationary states are expressed as:

2.  Energy of an electron in nth orbit is given as:

Limitations of Bohr’s model of atom:
1. It failed to account for the finer details of the hydrogen spectrum.

2. It was unable to explain spectrum of atoms containing more than one electron.

3. It failed to explain splitting of the spectral lines in presence of electric (Stark effect) or magnetic field ( Zeeman effect).

4. It failed to explain formation of molecules from atoms by chemical bonding.

de Broglie proposed that matter exhibits dual behavior, i.e., matter shows both particle as well as wave nature and gave the following relation between wavelength (λ) and momentum (p) of a material particle.

[Where, m is the mass of the particle, v its velocity and p its momentum]

The above equation is named as de Broglie’s relation.
Heisenberg’s Uncertainty Principle:

It states that it is impossible to determine simultaneously, the exact position and exact momentum (or velocity) of an electron. The product of their uncertainties is always equal to or greater than h/4π. I.e.,

Where, Δx = uncertainty in position

Reasons for the Failure of the Bohr Model:

1. It ignores the dual behavior of matter.

Try the following questions to check your preparedness for the above stated topics:

2. Show that the ciccumference of Bohar orbit for the hydrogen atom is an integral multiple of the Broglie wavelength associated with the electron revolving around the nucleus.

3. Why is the uncertainty principle not applicable to macroscopic particles?

5. What is the significance of the statement "Product of uncertainity in position and momentum is always constant if measured simultaneously"?

6. Why is the uncertainty principle not applicable to macroscopic particles?

Hydrogen Atom and the Schrödinger Equation:

The region of space around the nucleus where the probability of finding an electron is maximum is called an orbital.

There are a set of four quantum numbers which specify the energy, size, shape and orientation of an orbital.

The region where the probability density function reduces to zero is called nodal surfaces or simply nodes.

Radial nodes: Radial nodes occur when the probability density of wave function for the electron is zero on a spherical surface of a particular radius. Numberof radial nodes = n – l – 1

Angular nodes: Angular nodes occur when the probability density wavefunction for the electron is zero along the directions specified by a particular angle. Number of angular nodes = l
Total number of nodes = n – 1

Orbitals having the same energy are called degenerate orbitals. Shape of p and d-orbitals 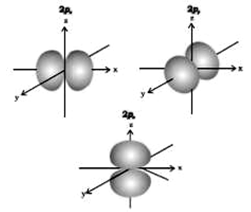 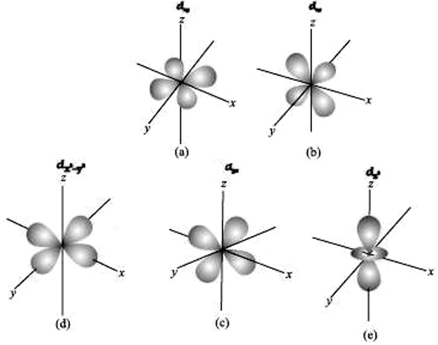 Due to the presence of electrons in the inner shells, the electron in the outer shell will not experience the full positive charge on the nucleus. So, due to the screening effect, the net positive charge experienced by the electron from the nucleus is lowered and is known as effective nuclear charge. Effective nuclear charge experienced by the orbital decreases with increase of azimuthal quantum number (l).

Stability of completely filled and half filled subshells: 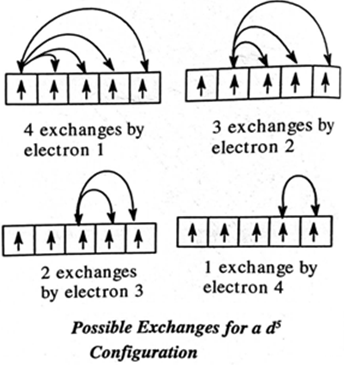 Try the following questions to check your preparedness for the above mentioned topics:

1. What physical menaing is attributed to the square of the absolute value of wave function |Ψ2| ?

4. How many nodes are there in 3s orbital?

5. What is teh value of orbital angular momentum of 6s orbital?

6. What is meant by degenerate orbitals? Illustrate with the help of an example.