Question1. Name the parts of an angiosperm flower in which development of male and female gametophyte take place.

Pollen grains represent the male gametophyte in an angiosperm which develops inside the microsporangia. On the other hand, female gametophytes of angiosperms are formed from the megaspore through the process of reduction division which lies inside the nucellus of ovule.

Question2. Differentiate between microsporogenesis and megasporogenesis. Which type of cell division occurs during these events? Name the structures formed at the end of these two events.

In both the processes, meiosis takes place.

Question3. Arrange the following terms in a correct developmental sequence:

Question4. With a neat labelled diagram, describe the parts of a typical angiosperm ovule. 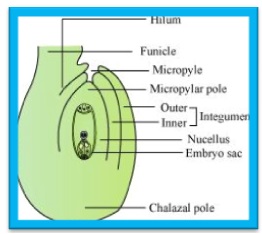 Question5. What is meant by monosporic development of female gametophyte? 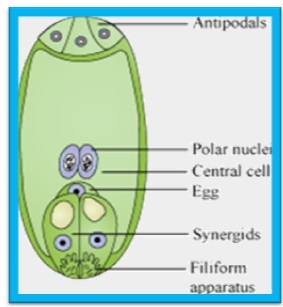 Those flowers which have exposed anthers and stigma are called chasmogamous flowers.

(b) Self-incompatibility – It is the genetic inability of certain pollen grains to fertilize the ovules of same flower or plant.

Self incompatibility is also called self sterility. It is the natural inability to prevent self pollination in which pollen grains from the same flower is unable to fertilize ovules of same flower or plant.

It happens due to several complex mechanisms. These could be saprophytic or gametophytic incompatibility. Prevent of pollen germination, retardation of growth, reorientation of pollen tube, failure of nuclear fusion could be one of the reason.

Question10. What is bagging technique? How is it useful in a plant breeding programme?

Bagging is a technique used to prevent the fertilization of stigma from unwanted pollen by covering the emasculated flower with butter-paper. It is useful in a plant breeding programme because it prevents from unwanted cross pollination.

It is fusion of three haploid nuclei during double fertilization. It takes place in the central cell between one male gamete and two polar nuclei and it forms triploid primary endosperm nucleus.

Question12. Why do you think the zygote is dormant for sometime in a fertilized ovule?

(a) Hypocotyl and epicotyl

(a) Hypocotyl and epicotyl

Question14. Why apple is called a false fruit? Which parts of the flower forms the fruit?

Apple is called a false fruit because the thalamus also contributes in the formation of fruit.

Fruits are mainly matured ovary together with structures close to ovary but after the formation of fruit, structures other than ovary degenerates and fall off.

Question15. What is meant by emasculation? When and why does a plant breeder employ this technique?

It is a technique done manually in which anthers from flower bud are removed before the pollen dehisces. It is done by plant breeders to produce species of plants having desirable characters by cross-pollination of own choice.

It is a process in which fruits are produced by the use of growth hormones like auxins and gibberellines. It is either done natural or induced. No fertilization takes place in parthenocarpic fruits.

Fruits like oranges, lemons can be easily produced by the process of parthenocarpy.

Question17. Explain the role of tapetum in the formation of pollen grain wall.

Innermost wall of microsporangium is called tapetum. Tapetal cells may have uni, bi or multi nucleate and have dense cytoplasm.

Role played by tapetum are as following:-

a) It secretes hormones and various enzymes.

b) During meiosis in spore mother cells, tapetum supports nutrition to anther locule.

c) It produces ubisch bodies which are coated with sporopollenin to cause thickening of exine.

d) It secretes protein for pollen to be compatible during recognition.

Question18. What is apomixes and what is its important?

For hybrid seed industry, apomixes is very important because year after year seeds needs to be produced, which makes these seeds very costly. There won’t be any segregation of characters in hybrids, if the hybrids are made apomicts. Thus, making these seeds to be used year after and that makes hybrid seeds very economical.