This year, CBSE class 12 Chemistry paper is scheduled to be held on March 25th. Thus, with only about one and a half months left for the exam, students appearing for the exam must gear up for the final revisions. They should start solving more and more previous years’ question papers which will help the students track their performance and understand the exam pattern along with latest marking trends. Moreover, it will give a clear overview of the types of questions asked in the board exam.

Jagranjosh here brings a collection of Class 12 Chemistry Last 5+1 years’ Long Answer Type Questions along with Value Based Questions asked in previous years’ exam papers to help the students get a firm grip over the 5 marks questions that are probably going to be asked in the upcoming board exam 2017.

1. (a) Differentiate between molarity and molality for a solution. How does a change in temperature influence their values?
(b) Calculate the freezing point of an aqueous solution containing 10.50 g of MgBr2 in 200 g of water. (Molar mass of MgBr2 = 184 g), (Kf for water = 1.86 K kg mol-1)

2. (a) Give chemical tests to distinguish between
(i) Propanal and propanone,
(ii) Benzaldehyde and acetophenone.

(b) How would you obtain
(i) But-2-enal from ethanal,
(ii) Butanoic acid from butanol,
(iii) Benzoic acid from ethylbenzene? 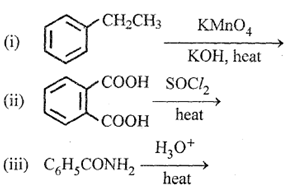 3. (a) Explain the following:
(i) NF3 is an exothermic compound whereas NCl3 is not.
(ii) F2 is more reactive of all the four common halogens.

(a) Account for the following:
(i) The acidic strength decreases in the order HCl > H2S > PH3
(ii) Tendency to form pentahalides decreases down the group in group 15 of the periodic table.

(a) Explain the following-:
(i) Henry’s law about dissolution of a gas in a liquid
(ii) Boiling point elevation constant for a solvent
(b) a solution of glycerol (C3H8O3) in water was prepared by dissolving some glycerol in 500 g of water. This solution has a boiling point of 100.42°C. What mass of glycerol was dissolved to
make this solution? (Kb for water = O.512 K kg/mol)

5. (a) Draw the molecular structures of the following compounds:
(i) N2O5
(ii) XeOF4
(b) Explain the following observations:
(i) Sulphur has a greater tendency for catenation than oxygen.
(ii) ICl is more reactive than I2
(iii) Despite lower value of its electron gain enthalpy with negative sign, fluorine (F2) is   a stronger oxidising agent than Cl2.

(a) Complete the following chemical equations:

(b) Explain the following observations:
(i) Phosphorus has greater tendency for catenation than nitrogen.
(ii) Oxygen is a gas but sulphur a solid.
(iii) The halogens are coloured. Why?

6. (a) Write a suitable chemical equation to complete each of the following transformations:
(i) Butan-1-ol to butenoic acid
(ii) 4-Methylacetophenone to benzene-1,4-dicarboxylic acid
(b) An organic compound with molecular formula C9H10O forms 2,4-DNP derivative, reduces Tollen's reagent and undergoes Cannizzaro reaction. On vigorous oxidation it gives
1, 2-benzenedicarboxylic acid. Identify the compound.

7. (a) State Raoult's law for a solution containing volatile components. How does Raoult’s law become a special case of Henry’s law?

8. (a) Give reasons for the following:

(iii) Although ‘F’ is more electronegative than ‘O’, the highest Mn fluoride is MnF4, whereas the highest oxide is Mn2O7.

(b) Complete the following equations:

(a) Why do transition elements show variable oxidation states?

(i) Name the element showing maximum number of oxidation states among the first series of transition metals from Sc (Z = 21) to Zn (Z = 30).

(ii) Name the element which shows only +3 oxidation state

(b) What is lanthanoid contraction? Name an important alloy which contains some of the lanthanoid metals.

9. (a) How will you convert the following:

(b) Give simple chemical test to distinguish between:

(a)Write the products of the following reactions: 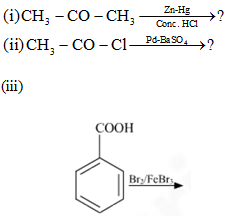 (b) Which acid of each pair shown here would you expect to be stronger? 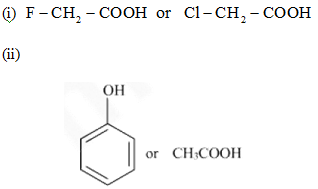 (b) A solution containing 15 g urea (molar mass = 60 g/mol) per litre of solution in water has the same osmotic pressure (isotonic) as a solution of glucose (molar mass = 180 g/mol) in water. Calculate the mass of glucose present in one litre of its solution.

(a) What type of deviation is shown by a mixture of ethanol and acetone? Give reason.

11. (a) Complete the following equation:

(i) Zn is not considered as a transition element.

(i) With reference to structural variability & chemical reactivity, write the differences between lanthanoids & actinoids.

(ii) Name a member of the lanthanoid series which is well known to exhibit +4 oxidation state.

12. (a) Write the products formed when CH3CHO reacts with the following reagents:

(iii) CH3CHO in the presence of dilute NaOH

(b) Give simple chemical tests to distinguish between the following pairs of compounds:

(i) Benzoic acid and Phenol

(i) CI-CH2COOH is a stronger acid than CH3COOH.

(ii) Carboxylic acids do not give reactions of carbonyl group.

(b) Write the chemical equations to illustrate the following name reactions:

(i) how the rate of reaction affected if the concentration of B is doubled?

(ii) What is the overall order of reaction if A is present in large excess?

(b) A first order reaction takes 23.1 minutes for 50% completion. Calculate the time required for 75% completion of this reaction.

(i) Interhalogens are more reactive than pure halogens.

(b) Draw the structures of the following:

(a) Which poisonous gas is evolved when white phosphorus is heated with conc. NaOH solution? Write the chemical equation involved.

(c)Fluorine is a stronger oxidising agent than chlorine, why?

(d) What happens when H3PO3 is heated?

15. (a) Illustrate the following reactions giving suitable example in each case:

(b) Distinguish between the following pairs of compounds:

(a) Write the structure of the main products when benzene diazonium chloride (C6H5N2+Cl-) reacts with the following reagents:

(b) Arrange the following:

16. (a) Write structures of A and B in following reactions:

(c) Arrange the following in increasing order of their boiling points:

(a) Write the chemical reaction involved in Wolff-Kishner reduction.

(b) Arrange the following in the increasing order of their reactivity towards nucleophilic addition reaction:

(c) Why carboxylic acid does not give reactions of carbonyl group?

(e) A and B are two functional isomers of compound C3H6O. On heating with NaOH and I2, isomer B forms yellow precipitate of iodoform whereas isomer A does not form any precipitate. Write the formulae for A and B.

17. (a) Calculate Eocell for the following reaction at 298 K

(b) Using the Eo values of A and B, predict which is better for coating the surface of iron [Eo (Fe2+/Fe)=-0.44V] to prevent corrosion and why?

(b) Complete the following reactions:

The elements of 3d transition series are given as

(i) Write the element which shows maximum number of oxidation states. Give reason.

(ii) Which element has the highest melting point?

(iv) Which element is a strong oxidizing agent in +3 oxidation state and why?

Q. On the occasion of world Health Day, Dr. Satpal organized a 'health camp’ for the poor farmers living in a nearby village. After check-up, he was shocked to see that most of the farmers suffered from cancer due to regular exposure to pesticides and many were diabetic. They distributed free medicines to them. Dr. Satpal immediately reported the matter to the National Human Rights Commission (NHRC). On the suggestions of NHRC, the government decided to provide medical care, financial assistance, setting up of super-speciality hospitals for treatment and prevention of the deadly disease in the affected villages all over India.

(ii) What types of analgesics are chiefly used for the relief of pains of terminal cancer?

(iii) Give an example of artificial sweetener that could have been recommended to diabetic patients.

Q. seeing the growing cases of diabetes and depression among young children, Mr. Lugani, the principal of one reputed school organized a seminar in which he invited parents and principals. They all resolved this issue by strictly banning junk food in school s and introducing healthy snacks and drinks like soup, lassi, milk etc in school canteen s. They also decided to make compulsory half an hour of daily physical activities for the students in the morning assembly. After six months, Mr. Lugani conducted the health survey in most of the schools and discovered a tremendous improvement in the heath of students.

After reading the above passage answer the following question:

(i) What are the values displayed by Mr. Lugani?

(ii) As a student, how can you spread awareness about this isuue ?

(iii) What are the anti-depressant drugs? Give an example.

(iv)Name the sweetening agent used in the preparation of sweets for a diabetic patient.

Q. Due to hectic and busy schedule, Mr Singh stared taking junk food in the lunch break and slowly became habitual of eating food irregularly to excel in his field. One day during meeting he felt severe chest pain and fell down. Mr Khanna, a close friend of Mr Singh, took him to doctor immediately. The doctor diagnosed that Mr Singh was suffering from acidity and prescribed some medicines.  Mr Khanna advised him to eat homemade food and change his lifestyle by doing yoga, meditation and some physical exercise. Mr Singh followed his friend’s advice and after few days he started feeling better.

After reading the above passage, answer the following:

(i) What are the values (at least two) displayed by Mr Khanna?

(ii) What are antacids? Give one example.

(iii) Would it be advisable to take antacids for a long period of time? Give reason.

Get solution to all these questions here.