Discussion on Union Budget -2016-17: Call for separate budget for agriculture

A call for a separate budget for agriculture has been made by C.H. Venkatachalam, National Executive Committee Member of the Communist Party of India. 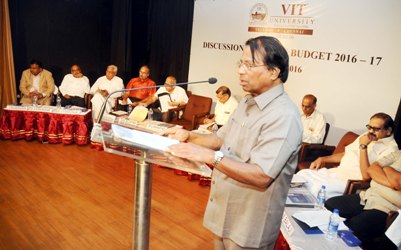 A call for a separate budget for agriculture has been made by C.H. Venkatachalam, National Executive Committee Member of the Communist Party of India.
Participating in the Discussion on the Union Budget-2016-2017 organised by the VIT University, Vellore at Chennai,  Mr. Venkatachalam said that the economic reforms have not benefited the poor even 25 years after the initiation of the reforms process by the then Finance Minister Manmohan Singh in 1991.

The Union Budget 2016-17 will only further increase the disparity between the rich and the poor.  It provides more and more concessions to the rich, and no concessions to the poor.  The allocation for agriculture does not address the problems in agriculture by failing to provide for modernisation of agriculture.  “If the government can write off Rs.2,00,000 crores of corporate loans, why not waive the loans of the farmers?  It has done nothing to address the problem posed by bad loans which constituted Rs.8,00,000 crores”, he said.

The CPI leader said that the central government should increase the credit-GDP (Gross Domestic Product) ratio in order that the farmers got more loans.  A separate budget for agriculture alone can solve the problems of the farmers, he said.

G. Viswanathan, VIT Chancellor who presided said that the Confederation of Indian Industry (CII) and the Associated Chambers of Commerce of India (ASSOCHAM) should take joint efforts to avoid tax evasion in order to end corruption and ensure all round development of the country.  He requested the central government to end the shortage of medical seats in India.  He said that as against a requirement of five lakh medical seats, the medical colleges in the country offered only 50,000 seats, as a result of which medical aspirants go abroad to countries like China, Russia and Philippines to pursue medical education.  Seventy-five % of the 13,000 medical students in China are Indians, and this trend should end, he said.

S. Peter Alphonse (Tamil Maanila Congress) criticised the Union Budget for not increasing the Minimum Support Price (MSP) for farmers, and for failing to address the massive unemployment problem in India.  About 1.5 lakh unemployed graduates are produced every year, while various sectors including the IT and transport sectors have seen a massive reduction in jobs, he said. 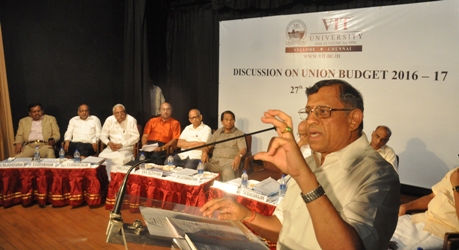 Americai V. Narayanan, spokesperson of the Congress said that the central government has not only failed to increase the MSP for agricultural produce but has also asked the state governments not to increase the price. The government has only provided 3 % of the budget for primary and secondary education, which speaks of its indifference towards this sector, he said.

T.K. Rangarajan, Rajya Sabha MP and Central Committee Member of the Communist Party of India (Marxists) wanted the government to take steps to increase the domestic purchasing capacity.  Besides, the declining trend in investment in agriculture has to be reversed.  Educated unemployment is rising, and new jobs have to be created.  “Chinese imports of products including Agarbathi, Vinayaka idols and Holi colours and water guns have crippled the small and tiny industries in India”, he said.

S. Gurumurthy, noted columnist who moderated the discussion said that the modest economic growth that India has been achieving in the last few years has been to India’s advantage. “In the last two years, there has been a shift towards India, Indian efforts and Indian entrepreneurship”, he said.

Mr. Gurumurthy said that the country’s economy is not vibrant if it depended more on exports.  India’s domestic consumption has been 60%, and that is the reason for the growth of India’s economy.  The columnist said that the Union Budget has given importance to irrigation, which is essential for the success of agriculture.   The allocation for irrigation has been made with the aim of bringing an additional 2.85 million hectares under irrigation this year.  “If 60% of Indian agricultural land is irrigated, it can feed the entire Asia”, he said, adding that rural development cannot be achieved without supplementing agricultural income with income from rural industries.  Rural development also depended on the success of the MUDRA (Micro Units Development and Refinance Agency) scheme since 60% of the labour force are from rural areas, he said.  Mr. Gurumurthi said that ending corruption has to be a joint effort by politicians, media and the public.

N. Ramasubramanyan, spokesperson of the Tamil Nadu Bharathiya Janata Party said that the critics of the Union Budget have failed to take note of the growth rate of 6% achieved in financial services, 7% each in the manufacturing sector, agriculture and fishing, 9 % in defence and 4% in the construction industry.  “For the first time, maximum orientation has been given to agriculture, rural sector and the social sector.  A total of Rs.34,900 crores has been allotted to agriculture.  This budget provides for value addition in agriculture which can go a long way in improving the income of farmers”, he said.

Disclaimer: The information provided in this Notification is solely by VIT University., Jagranjosh.com bears no representations or warranties of any kind, express or implied, about the completeness, accuracy, reliability, suitability or availability with respect to the information. Individuals are therefore suggested to check the authenticity of the information.