Here we have put the complete analysis of Syrian crisis which will be helpful in perspective of IAS Prelims as well as for IAS Mains Exam:

ISIS is becoming a curse on Humanity day by day and on Syria on a second by second basis. Syria is crisis ridden and needs help! The country is torn to its core and this war for motherland has resulted into suffering to its own children. Their loss is unjust and non-indemnifiable; the country has not only lost its pride but also generations. It has turned into a combat zone for multiple warring factions with their stakes. This state of perpetual war and conflict has displaced huge population both internally and externally. The world is witnessing the fall of a country, a humanitarian crisis of unfathomable proportion and an exodus of its inhabitants towards an uncertain future.
What began as a genuine people’s movement soon converted into one of the biggest destabilizing event in West Asia.  Arab spring took no time in becoming the dreaded winter.  Various nations are trying to do their bit, some of their own compulsions and others for aiding the helpless population, towards a course correction alongside the UN. In the same direction forward is the endeavor ‘Supporting Syria and the region’.

Objective – In the light of ongoing humanitarian violations, problems of IDP’s, refugee crisis and ever-growing conflict that mutilated the basic structure of country, the Supporting Syria platform took its form. Built upon 3 successful attempts since its inception, the 2016 conference is an endeavor to galvanize resources and funding targets to aid the humanitarian and relief response. In addition, the conference takes a step further by putting forth special focus on issues of education and employment opportunity, protection specifically to the extremely vulnerable women and girl population, to garner support against administrative and other obstructions for delivering reliefs and helps create a roadmap for recreating and rebuilding of a country once the crisis ends.

Operational Possibility in Syria
However, not everything is as easy as said because

•    Syria is stuck between raging wars. The nature of the war is disintegrated. There is continuous fighting, in-fighting and splintering of groups that are further fragmenting the region. This shifting of frontlines has got people, aid suppliers and others surrounded in conflict zone. The political dialogue has become difficult and the outreach crippled.

•    Government and administration has shown delays, by arbitrarily denying access to the aid-delivery. In addition, the relief workers and those involved with recovery process, face threat of violence and obstruction to the besieged and hard to reach areas.

•    Allegiance towards different groups and support to some rebel groups has reduced distinction between combatants and non-combatants. The risks get heightened and chances of wrong diversion become possible. 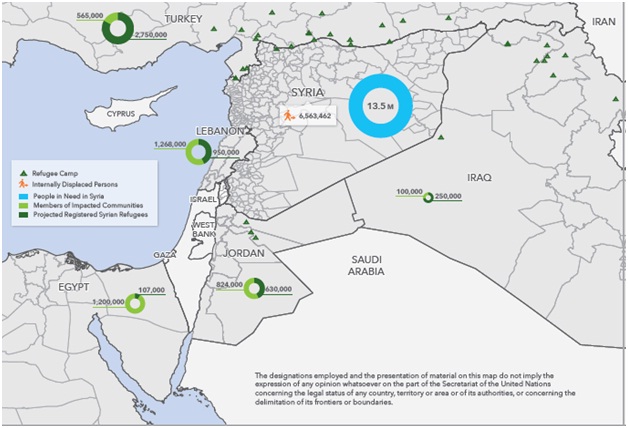 The abuses and violence perpetrated are in utter disregard of International Law including International Humanitarian Law and Human Rights Law.
1.    To begin with the number of displaced people is huge. Most of the populationis still caught in war zone, while rest have taken shelter in neighboring countries like Jordan, Lebanon, Egypt, Iraq and Turkey which is around 4.7 million. They are fleeing as refugees to these countries and risking their lives to reach safety. Maximum of these refugee camps are bordering Turkey and Iraq.

2.    This huge influx is quickly draining resources of the host countries. The supplies and stock are stressed. Those who have been successfully rehabilitated in host nations are creating employment pressure for low and unskilled jobs, directly impacting wage rate, working condition and increased competition. As a result the vulnerable refugee population is becoming tangled in social tension.

3.    With over 2.5 million killed and more than 1 million are injured so far, the war has taken toll on the population. This is a generation loss to a country.

4.    General insecurity, economic decline and reduced access to basic services like food supply, shelter and access to safe drinking has made sustenance difficult. Further, Women are increasingly vulnerable and children are losing on school. There is no routine immunization and health indicators are in reversal. All the achievements made over MDG’s are wasted.

As the UN document states, the proportion and scale of work to be done is immense. The UN Response document has carved the relief measure in two segments. One is the Humanitarian Response Plan for the Internally Displaced Population and the other is Regional Resilience Plan that is host country specific crisis management and refugee issue programme focusing on Jordan, Iraq, Lebanon and Turkey.
The relief measure therefore is designed to cater to the specific demands and problem faced by IDP’s and Refugee’s respectively. The areas of common work are shelter, food supply, education, nutrition agriculture, safe drinking water, employment, health. To develop resilience of affected households and individuals and start building of socio-economic infrastructure is one of the stated objectives of relief measures.

The HRP-3RP under UN aegis is working since 2013 on y-o-y basis to deal with specific indicators to alleviate the suffering Syrian population.  Despite a percentage decline in funds and humanitarian relief has by far been successfully working.  Some specific areas that are not doing so well are social cohesion, livelihood and sanitation.
Supporting Syria in conjunction with UN seeks to cater to longer-term needs with focus areas being access to education for all refugee and host community children by the end of the 2016-17, employment generation, applying international pressure to stop obstruction and abuse of law, create a safe regime especially for women and girls.

Syria represents a daunting task. The UN HRP-3RP needs $7.73 billion for 2016 alone. In 2015, the UN-coordinated inter-agency was able to raise only 56% of total demand. The slip in percent of funds generated can compromise the relief work. Apart from this, a long-term finance source will be necessary for a clear roadmap to the program implementation.  Therefore, Supporting Syria Platform seeks to supplement the fund requirements and aid to the reconstruction, rehabilitation and relief process, easing resource stress on the UN and countries hosting refugee population.
This year’s conference was a successor to earlier pledging conference. The platform managed to raise $11 billion of which $5.9 billion is for 2016 HRP-3RP, ICRC Syria appeals and UNRWA requirements for Palestinian Refugees in Syria. Remaining $5.4 billion is for Syria Crisis Plan 2017-20. In addition, Multilateral Development Banks and International Donors have committed loans worth $40 billion on concessional terms.
UN on its own is generating fund through CERF- Funding provided by governments, private companies, foundations, charities and individuals, in-kind relief, Donations through Country-Based Pooled Funds (CBPF) for four countries (Syria, Iraq, Jordan and Lebanon) to support country level strategic decision making and Direct Individual Donations to HRP and 3RP.

An offshoot of Al-Qaeda, ISIS/Daesh is now functioning independently. The group is led by Abu Bakr Al-Baghdadi, who joined al-qaeda after 2003 US led Iraq invasion. He soon took leadership of al-qaeda branch in Iraq. However, due to difference and of destabilized political situation in Iraq, Baghdadi soon separated and formed Islamic State of Iraq and Syria (ISIS). Emergence of the terrorist group has jeopardized the efforts of relief workers and deteriorated the conflict situation, displacing many every day. The group has substantial control of area joining Iraq and Syria and boosts a big recruit base. Known for its brutal use of force it is one of the biggest threat to peaceful rebuilding and restoring peace in Syria.

The group’s long term self proclaimed objective has been setting up of an Islamic Caliphate and gaining religious, political and military authority over all Muslims worldwide. The group intends to apply its interpretation of Sharia. However, some contradiction exists, but largely the group relies on fundamentalist interpretation of Sharia supported by Wahabism and Salafism over region already under their control and the others they are aiming at. The mainstream Islamic clerics and organizations claim that the group interprets Quran wrongly and has strayed from its path. They do not propagate true virtues of Islam and Prophet, and rather relies on the cult of jihadist fundamental approach.

Funding of ISIS
One of the most highly cash rich group. Initially it received its funding from wealthy individuals and Gulf Arab states, Saudi and Kuwait primarily. This was because of their support for the fight against president Bashar-al-Assad. Today, as having gained control over many territories and being a tactical military organization, it has earned significant amount from the gains made of oil fields in eastern Syria and northern Iraq, generating heavy revenues from the sale of oil. Other source of funding includes looting of antiquities from historical sites like Palmyra. The group also got access to millions of dollars from takeover of Mosul and its central bank. It is suggested that the group also generated its funds from human trafficking and narcotics.

Apart from the immediate control of Iraq and Syria, the group also exercises its influence in Africa and South Asia through its affiliates like Boko-Haram in Libya, Egypt, Nigeria and some arts of Afghanistan.  the group has extended its presence to Caucasus region too.

India has always maintained cordial relation with Syria since independence. There has been a regular diplomatic interaction between India and Syria, as recent as 2008 when President Assad visited New Delhi.
India has reacted pragmatically to the ongoing conflict and is not playing a mute spectator to the issue because as Mr. Khurshid highlights “India has important stakes in the Syrian conflict. It shares deep historical and civilizational bonds with the wider West Asia and the Gulf Region. We have substantial interest in the field of trade and investment, diaspora, remittances, energy and security. Any spillover from the Syrian conflict has the potential of impacting negatively on our larger interests.” India promotes political dialogue to bring about a peaceful resolution to the problem and help meet aspiration of its people, in pursuance of Article 1 of UN Charter that talks of respect to territorial integrity and political sovereignty. India’s official stand does not differentiate between good or bad terrorism. Syrian Government appreciates the position that balances between concerns and yet avoids excess indulgence in domestic affair or use of external military intervention, which is said to have contributed to the crisis due to involvement of myriad stake.

What more can be done

 As a moral duty continue with the humanitarian aid whatever political outcome be. The help directed directly towards civilians within the country and to refugees in neighboring countries such as Jordan and Lebanon.

    Do away with all obstructions such as granting visas easily to international NGO’s so that humanitarian assistance can reach the intended beneficiary. Generations need to be saved from the scourge of war.

    Neighboring and European countries should not deny access to refugees and express solidarity with the victims.

    External military intervention direct and indirect has to be restrained.  The fight against the IS has to be pursued as a global problem. Action needs to be taken under the UN banner collectively. This will provide legitimacy, with adequate checks on efforts and preserve the sovereignty of Syria.