Growing importance to foreign policy in UPSC IAS MAINS is evident of India’s rising role in world politics and consistent economic growth. A symbolic shift is seen in UPSC IAS MANS exam where more importance is given to the global polity influencing socio-economic structure in India. Here we will cover India and Sri Lanka’s growing relations and future way ahead’s to prosperity.

Q3. Trade ties between India and Sri Lanka while growing in the recent years are still far below their potential. Elucidate the policy constraints which are inhibiting this growth.

Sri Lanka assumes significance as it was one of South Asian Association for Regional Cooperation member-states which sided with India in pulling out of the SAARC summit in Pakistan, following the terror attack on an army base in Uri on September 18 by Pakistan-based terrorists.

This move of Sri Lanka is symbolic and evident of the nations own prolonged struggle against terror. It action showed that Sri Lanka is critical against any state sponsored extremism in any form as iterated by India in many aspect. It shows the common line of cooperation and understanding between the countries ideology and paves way for successful future endeavors in this direction.

Why Sri Lanka so important?

Sri Lanka has always been politically and economically important to India given its strategically geographical position in the Indian Ocean. The relationship has been marked by close contacts at all levels. Trade and investment have grown and there is cooperation in the fields of development, education, culture and defence.

Both countries share a common broad understanding on major issues of international interest and experience common social-political problems relating to community divides. The shared vision of both countries includes friendly neighborhood and a safe and prosperous south Asia.

India is Sri Lanka's closest neighbor. Both sides have built upon a legacy of intellectual, cultural, religious and linguistic interaction. In recent years, the relationship has been marked by close contacts at the highest political level, growing trade and investment, cooperation in the fields of development, education, culture and defence, as well as a broad understanding on major issues of international interest.

Bilateral exchanges at various levels over the past year and significant progress in implementation of developmental assistance projects for the Internally Displaced Persons (IDPs) and disadvantaged sections of the population in Sri Lanka has helped further cement the bonds of friendship between the two countries.

The nearly three-decade long armed conflict between Sri Lankan forces and the LTTE came to an end in May 2009. During the course of the conflict, India supported the right of the Government of Sri Lanka to act against terrorist forces.
At the same time, it conveyed at the highest levels its deep concern at the plight of the mostly Tamil civilian population, emphasizing that their rights and welfare should not get enmeshed in hostilities against the LTTE.

The relationship between India and Sri Lanka is more than 2,500 years old since the great Indian emperor Asoka’s son Venerable Mahindra introduced Buddhism during the reign of Sri Lanka's King Devanampiya Tissa. Since then both countries have a legacy of intellectual, cultural, religious and linguistic interaction.
The resources have been shared from long back: 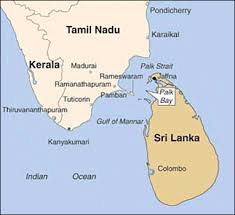 Why the Concerns and Conflicts?

Sri Lanka has experienced a 60 year old ethnic civil crisis and an alternative constitutional framework with electoral and governance reforms has been introduced recently with comprehensive rights regime and substantive power-sharing arrangements involving all ethnic minorities as the corner stone.
During the course of the conflict, India supported the right of the Government of Sri Lanka to act against terrorist forces. At the same time, India has consistent position in favour of a negotiated political settlement, which is acceptable to all communities within the framework of a united Sri Lanka.

India has also conveyed its deep concern at the plight of the mostly Tamil civilian population, emphasizing that their rights and welfare should not get enmeshed in hostilities against the LTTE.
According to Government census figures (2011), the population of IOTs is about 1.6 million. The People of Indian Origin (PIOs) comprise persons who have settled down in Sri Lanka and are engaged in various business ventures.

Though their numbers are much lesser as compared to Indian Origin Tamils (IOTs), they are economically prosperous and are well placed. Each of these communities has their organization which organizes festivals and cultural events and mostly employed business in Colombo. This rich Indian Diaspora is another reason for Indians proactive role in Sri Lankan problems.

Given the proximity of the territorial waters of both countries, especially in the Palk Straits, incidents of straying of fishermen are common. Both countries have agreed on certain practical arrangements to deal with the issue of bona fide fishermen of either side crossing the International Maritime Boundary Line.
Through these arrangements, it has been possible to deal with the issue of detention of fishermen in a humane manner but further cooperation is required to safeguard the employment needs of this community.

A new political vision in Sri Lanka is filled with new hopes and fears for India as Sri Lanka is India’s second largest trading partner in SAARC and the rights issues of Indian origin Tamilians and strayed fishermen can only be iterated in a politically stable Sri Lanka.

-->India’s strong “hands off policy” of non interference in the internal political struggles on Sri Lanka since 1991 as gained a constructive vibe among the Sri Lankan government.

-->Meanwhile the humanitarian work by Indian agencies like supplies of medicines , doctors and providing refuge to more than 3 lakhs IDP’s during the decade old civil war has created a sense of mutual cooperation among the countries natives.

-->At the same time categorically supporting each others claim in various regional and global cooperation like SAARC, UNHRC, WTO etc, both have proved to be true admirer of each other’s endeavors. For example, Sri Lanka supporting India’s stand in SAARC and SAFTA while India’s support to Sri Lanka during civil war.

-->With the signing of free trade agreements and ETCA, both countries share great prospects in future trade relations and golden chance to get resume the past glorified trade ties in spices and

--> Both countries are blessed with a long resourceful coastline and skilled fishermen communities. A framework system of technology and workforce transfer can be created to maximize the resource utilization at the same time exploiting the marine resources within the framework of sustainable development.

--> With the excellently equipped international port cities like Colombo, cochin and Chennai, both countries have the untapped potential to develop a trade route to south east Asia via India and Sri Lanka and form an epicenter for commerce in Indian Ocean.

India's consistent position is in favour of a negotiated political settlement, which is acceptable to all communities within the framework of a united Sri Lanka and which is consistent with democracy, pluralism and respect for human rights. Progressive trade and economic ties is the key to prosperity in India Sri Lanka relations and the free trade agreement acts as a catalyst to address this solution.

One of the biggest challenges for Indian diplomacy in the subcontinent is to persuade its neighbor that India is an opportunity and not a threat.  The growing economic strength can provide an equitable chance to all the countries in the subcontinent to prosper, Sri Lanka’s recovering stable polity and growing economic ties with India is an example of cooperation among mature democracies.