NCERT Exemplar Solutions for Class 12 Physics, Chapter 1: Electric Charges and Fields are available here. Here, you will find solutions of short answer type questions of the chapter (i.e., from question number 1.20 to 1.25). These questions are important for CBSE Class 12 Physics board exam and other competitive exams like JEE Main, NEET etc.

NCERT Exemplar Solutions for Class 12 Physics, Chapter 1: Electric Charges and Fields (from from question no. 1.20 to 1.25 are given below:

Question 1.20: A paisa coin is made up of Al-Mg alloy and weighs 0.75g. It has a square shape and its diagonal measures 17 mm. It is electrically neutral and contains equal amounts of positive and negative charges.

Treating the paisa coins made up of only Al, find the magnitude of equal number of positive and negative charges. What conclusion do you draw from this magnitude?

From this one can easily understand that ordinary atom has large amount of charge.

Question 1.21: Consider a coin of Example 1.20. It is electrically neutral and contains equal amounts of positive and negative charge of magnitude 34.8 kC. Suppose that these equal charges were concentrated in two point charges separated by

Find the force on each such point charge in each of the three cases. What do you conclude from these results?

Suppose, q be the magnitude of the charge and r1, r2 and r3 be the distances in first, second and third case respectively.

According to the question,

Suppose, F1, F2 and F3 are forces in first, second and third case respectively, then by using

Conclusion: When separated as point charges these charges exert an enormous force. It is not easy to disturb electrical neutrality.

Question 1.22: Fig. 1.10 represents a crystal unit of cesium chloride, CsCl. The cesium atoms, represented by open circles are situated at the corners of a cube of side 0.40 nm, whereas a Cl atom is situated at the centre of the cube. The Cs atoms are deficient in one electron while the Cl atom carries an excess electron. 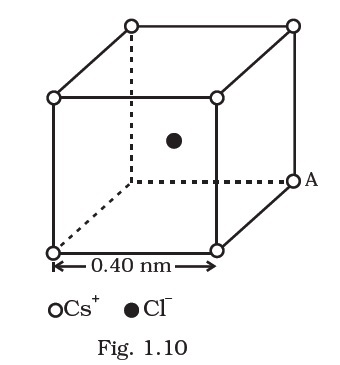 (i) What is the net electric field on the Cl atom due to eight Cs atoms?

(ii) Suppose that the Cs atom at the corner A is missing. What is the net force now on the Cl atom due to seven remaining Cs atoms?

(ii) In the given question, removing Cs atom at the corner A is equivalent to adding a singly charged negative Cs ion at point A.

Applying Pythagoras theorem, we have

The direction of force is from A to Cl‒

Question 1.23: Two charges q and –3q are placed fixed on x-axis separated by distance‘d’. Where a third charge 2 q should be placed such that it will not experience any force?

The situation given in question is shown in the figure given below: 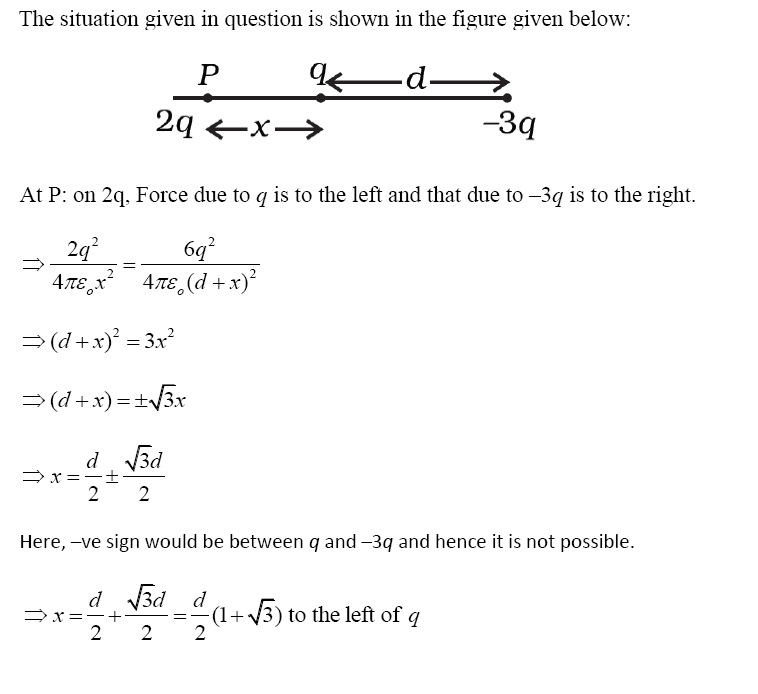 Question 1.24: Fig. 1.11 shows the electric field lines around three point charges A, B and C. 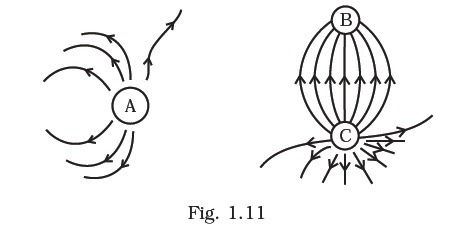 (a) Which charges are positive?

(b) Which charge has the largest magnitude? Why?

(c) In which region or regions of the picture could the electric field be zero? Justify your answer.

(a) Charges A and C are positive since lines of force emanate from them.

(b) Charge C has the largest magnitude since maximum numbers of field lines are associated with it. 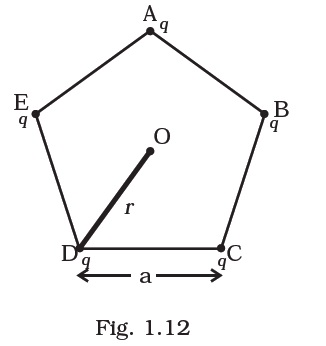 (a) (i) What will be the electric field at O, the centre of the pentagon?

(ii) What will be the electric field at O if the charge from one of the corners (say A) is removed?

(iii) What will be the electric field at O if the charge q at A is replaced by –q?

(b) How would your answer to (a) be affected if pentagon is replaced by n-sided regular polygon with charge q at each of its corners? 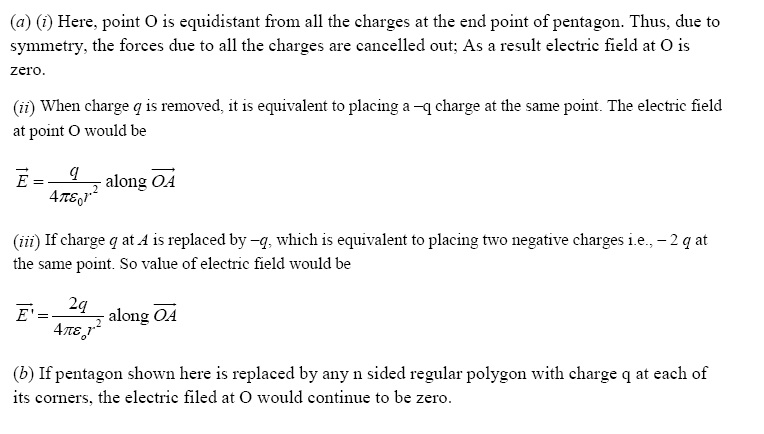