Researchers from IIS found that the genus Proahaetulla resides within the family Ahaetuliinae, is a close relative of all the other vine snakes. 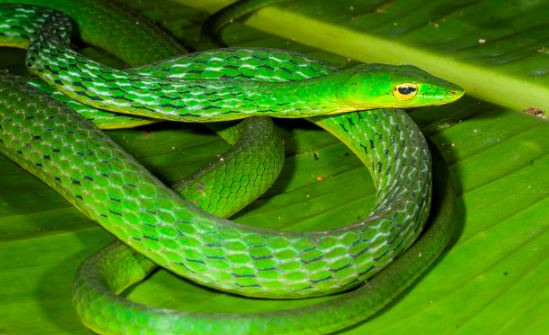 A team of researchers from Indian Institute of Science (IIS), Bengaluru trying to study snakes present in the Western Ghats of India. During this research, researchers found a new species of vine snake belonging to an ancient ancestry dating back to between 20 and 30 million years.

Researchers from IIS found that the genus Proahaetulla resides within the family Ahaetuliinae, is a close relative of all the other vine snakes belonging to the genus Ahaetulla and is visually similar.

Researchers confirmed about their finding with integrative taxonomy.  Integrative taxonomy is an amalgamation of different lines of evidence, from teeth, genetics and molecular phylogenetics, structure and bone analysis to traditional taxonomy that helped the researchers to identify a new genus.

• This research and finding report was recently published in the journal PLOS ONE in collaboration with researchers from Chennai Snake Park, Chennai and Bombay Natural History Society, Mumbai, the team has described the unique features of this snake.
• Latest discovery by researchers sheds light on the early colonisation of members of the family Ahaetuliinae in various parts of Asia, such as Peninsular India and Sri Lanka.
• This family of snake includes 62 non-venomous species of snakes belonging to four genera: Ahaetulla (vine snakes), Chrysopelea (flying snakes), Dendrelaphis (bronzebacks) and Dryophiops (whip snakes).
• Most of these snakes are located in south and south-east Asia, and parts of East Asia. Dendrelaphis is the largest genus, with 45 species.
• Latest discovery of ancient vine snake will not only help to know more about the evolution of vine snakes but also the evolutionary history of the Western Ghats. The Western Ghats are older than Himalayas.

About Western Ghats of India

Western Ghats of India extends along the west coast of India from River Tapti in the north to the southern corner of India. Western Ghats was declared as world heritage site on July 2012 by UNESCO. Western Ghats are a habitat of more than 5,000 plant and 140 species, 16 of them are endemic. Apart from this, 179 types of different species of amphibians found in the Western Ghats.

The Western Ghats starts right from the coastal areas of Gujarat, goes to Maharashtra and Goa. After that Malnad region of Karnataka and some high-lands of Tamil Nadu and Kerala includes in Wester Ghats that ends at Kanyakumari.