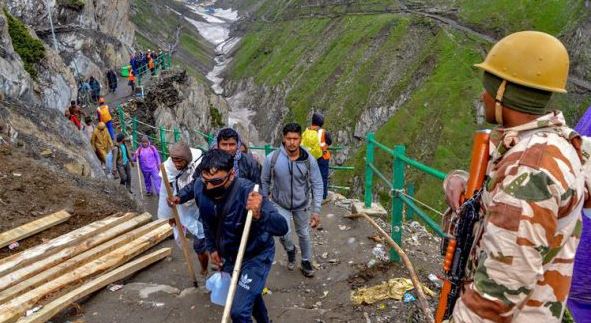 Amarnath Yatra 2019: On third day of Amarnath Yatra more than 4600 pilgrims left for cave shrine. However, 11,456 pilgrims completed darshan by second day. Another batch of 4,694 pilgrims left the Bhagwati Nagar Yatri Niwas in two convoys for the Kashmir Valley. Of these, 2,052 are headed for the Baltal base camp and 2,642 to Pahalgam.

Chairman of Shri Amarnath Ji Shrine Board (SASB) and governor of Jammu and Kashmir said that he will attend traditional "Pratham Pooja" at the cave shrine. The 46-day yatra will conclude on August 15 coinciding with Raksha Bandhan.

•    From Baltal camp 793 male, 203 female, 10 children and 44 Sadhus were included in a batch.
•    In Pahalgam camp batch 1046 male, 130 female and 7 children were included.
•    Jammu and Kashmir government claims that the arrangements are better than the previous years and the state machinery is working round the clock to ensure improved facilities
•    Children below 13 years, elderly persons above 75 years and pregnant lady with 6 weeks pregnancy shall not be permitted to undertake the pilgrimage.
•    Over 2 lakh 85 thousand Yatris had darshan of Shivlingam last year.

Indian Railway Tourism and Catering Corporation (IRCTC) has launched its special tour package from Chennai to Amarnath. Hindu pilgrimage Amarnath cave is located at Jammu and Kashmir. Amarnath Yatra attracts thousands of pilgrims of every year. If you are considering the Amarnath yatra in this summer season then this tour of IRCTC can prove to be the best. Let's explore this tour package and its specialties.

Amarnath cave is a Hindu shrine located in Jammu and Kashmir, India. The cave is situated at an altitude of 3,888 m (12,756 ft), about 141 km (88 mi) from Srinagar, the summer capital of Jammu and Kashmir and reached through Pahalgam town.

IRCTC package included flight tour for Amarnath Yatra 2019. This journey will begin on July 20. Starting from Chennai, the tour will reach Amarnath via Srinagar, Sonargaon and Nilgarth, again to Chennai.

IRCTC Package will include

•    Air ticket of economy class will be included in this package for both side travels.
•    Stay for 2 nights in Sonmarg and for 1 Night at Srinagar will be part of the event.
•    Vegetarian food included 3 breakfast and 3 dinner will be provided by IRCTC.
•    GST will be charged for this package.

Passengers below 13 yrs of age and above 75 yrs of age are not advised to take Amarnath Yatra. A Compulsory Health Check up duly issued by Authorized Doctors/ Institutes at the time of boarding the helicopter at Neelgrath/Pahalgam. No passenger shall be allowed to board the helicopter without submitting the Compulsory Medical Certificate (CHC).