Baghdadi died, he was crying like a coward: US President Donald Trump

US President Donald Trump formally announced that Abu Bakr al-Baghdadi, the leader of the terrorist organization Islamic State (IS), had been killed. 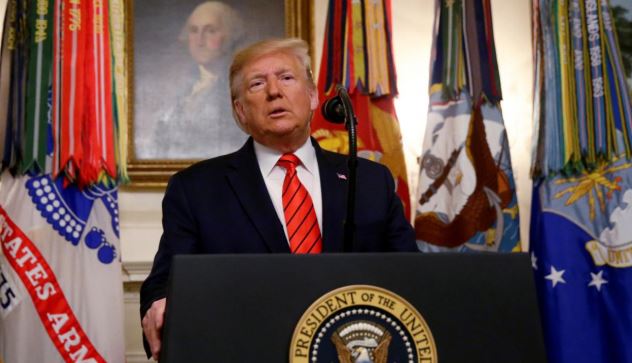 US President Donald Trump on October 27, 2019, formally announced that Abu Bakr al-Baghdadi, the leader of the terrorist organization Islamic State (IS), had been killed. Trump has confirmed this through a press conference, however, Russia raised some doubts.

According to Trump’s speech, special commandos of the US military conducted a special operation against Baghdadi in Baroda, a remote village in Idlib province, Syria. He said that after being completely engulfed, Baghdadi exploded and blew himself up. Baghdadi was killed in the same manner as Osama bin Laden was killed. 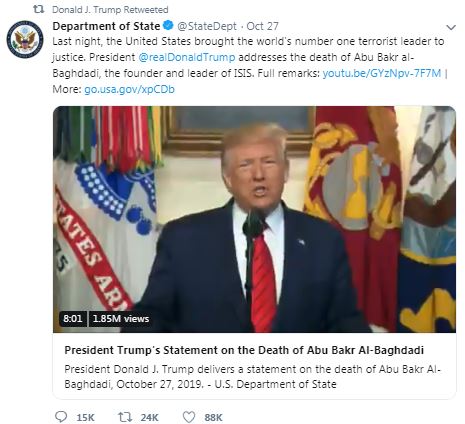 How Baghdadi was killed?

Trump said in a press conference that during the operation in Idlib in northwestern Syria, Baghdadi was surrounded by the US military. When he found no way to go he entered into a tunnel and started running wildly into it. The trained dogs of the American Army were chasing him during that time. According to the US President, Baghdadi was crying, screaming, begging and was in fear.

After running for a few minutes, the tunnel ended finally. Baghdadi had also kept three of his children with him when Baghdadi began to see his death, he flew pressed the button of his explosive jacket and blew himself instead of becoming a victim of dogs and US Army. A huge explosion occurred, a smog rose and the tunnel collapsed. Several tons of debris fell on Baghdadi and her three children.

US President Trump said that this operation lasted for about 2 hours. He said that 11 children were safely evacuated before the operation. According to the US President, after the explosion in the tunnel, the US Army found Baghdadi's body and conducted on-spot DNA tests, only then it was revealed that the person who blew himself was Baghdadi.

Who was Abu Bakr al-Baghdadi?

Baghdadi was deeply influenced by Osama Bin Laden and wanted to take revenge for his death by following in his footsteps. Baghdadi was actually inspired by the Wahhabi ideology, which aimed at the restoration of a medieval state in the world.

He declared himself a Khalifa and ruled many states of Syria and Iraq. The aim of Baghdadi was to spread it slowly by establishing a model Islamic state. But this was its theoretical aspect. His organization, Islamic State, was full of deep hatred against the Shias and waged bloody campaigns against all non-Sunnis. He was conducting terrorist activities in various countries.