The National Aeronautics and Space Administration (NASA) has announced that it would be extending the Dawn mission at Ceres until its hydrazine fuel runs out, after which it will continue to remain in a stable orbit around the dwarf planet. 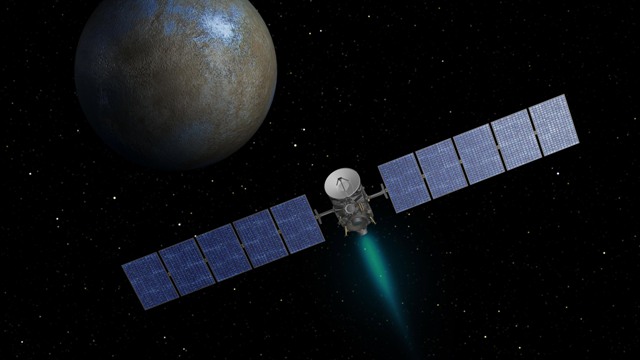 The National Aeronautics and Space Administration (NASA) on 19 October 2017 announced that it would be extending the Dawn mission at Ceres until its hydrazine fuel runs out, after which it will continue to remain in a stable orbit around the dwarf planet.

Ceres, a dwarf planet, is the largest object in the asteroid belt between Mars and Jupiter. During the extension, the spacecraft will descend to lower altitudes than ever before at the dwarf planet, which it has been orbiting since March 2015.

The spacecraft will continue its investigation at Ceres for the remainder of its probe by remaining in a stable orbit, where it will stay even after it can no longer communicate with Earth. Mission planners estimate the spacecraft can continue operating until the second half of 2018.

• The main priority of the second extension of the Dawn mission is to collect data using the spacecraft’s gamma ray and neutron spectrometer, which measures the number and energy of gamma rays and neutrons.

• The information is significant to understand the composition of Ceres' uppermost layer and how much ice it contains.

• The spacecraft also will take visible-light images of Ceres' surface geology with its camera, as well as measurements of Ceres' mineralogy with its visible and infrared mapping spectrometer.

• The extension will also allow Dawn to be in orbit while the dwarf planet goes through perihelion, its closest approach to the Sun, which will occur in April 2018.

• At closer proximity to the Sun, more ice on Ceres' surface may turn to water vapor, which may in turn contribute to the weak transient atmosphere detected by the European Space Agency's Herschel Space Observatory before Dawn's arrival.

• It is a space probe that was launched by NASA in September 2007 with the aim of studying two known protoplanets of the asteroid belt, Vesta and the dwarf planet, Ceres. It is currently in orbit around Ceres.

• The mission is managed by NASA’s Jet Propulsion Laboratory. Its major components are contributed by NASA’s European partners such as from German Aerospace Center, Italian National Astrophysical Institute and Italian Space Agency.

• Dawn created history by being the first spacecraft to orbit two extraterrestrial bodies and the first-ever spacecraft to visit either Vesta or Ceres.

• The spacecraft is also the first-ever to visit a dwarf planet. It accomplished the feat just a few months before New Horizons flew by Pluto in July 2015.

• It is NASA’s first exploratory mission to use ion propulsion to enter orbits and exit orbits of multiple celestial bodies.

• Previous multi-target missions using conventional drives, such as the Voyager program, were restricted to flybys.