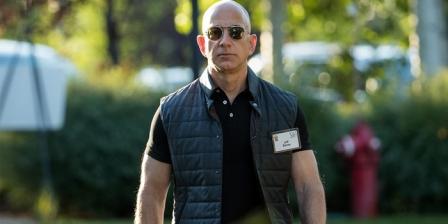 The report, after thorough evaluation, concludes that the superrich continue to get richer, widening the gap between the rich and everyone else.

• The total combined net worth of these 2208 billionaires came out to be USD 9.1 trillion, up from USD 7.7 trillion in last year.

• The Top 20 billionaires have a combined net worth of a record USD 1.2 trillion. Their aggregate wealth represents 13 per cent of all 2208 billionaires.

• Jeff Bezos topped the World's Billionaires List for the first time with a fortune of USD 112 billion, up from USD 39.2 billion in 2017, the biggest one-year gain ever.

• Bill Gates, who consistently topped the list for 18 of the past 24 years, dropped to 2nd position this year with a fortune of USD 90 billion, up from USD 86 billion in 2017. This is the biggest gap between the top 2 spots since 2001.

• Warren Buffett, with a net worth of USD 84 billion, secured 3rd spot in the list.

• Bernard Arnault gained 4th spot with a fortune of USD 72 billion. Moreover, Arnault also became the richest person in Europe for the first time since 2012.

A total of 119 Indian billionaires made into the list this year, up from 102 in 2017. Reliance Industries Ltd Chairman Mukesh Ambani leads Indians in Forbes' Billionaires List with net worth of USD 40.1 billion. He secured 19th global rank on the list of 2208 billionaires worldwide. In 2017, he got 33rd spot with wealth of USD 23.2 billion.

Entrepreneur Azim Premji moved up from the 72nd global spot in 2017 to the 58th rank with net worth of USD 18.8 billion this year, becoming second richest Indian.

Lakshmi Mittal fetched third spot among Indians and  56th global rank with net worth of USD 18.5 billion. The lowest ranked Indian billionaires in the list were Raamdeo Agrawal, Tarang Jain, Nirmal Minda, and Ravindra Kishore Sinha, all with a net worth of USD 1 billion each.

Richest Indian Woman
The richest Indian woman on the Forbes' Billionaires List is Savitri Jindal of the Jindal Steel and Power, who ranked 176th globally with USD 8.8 billion.