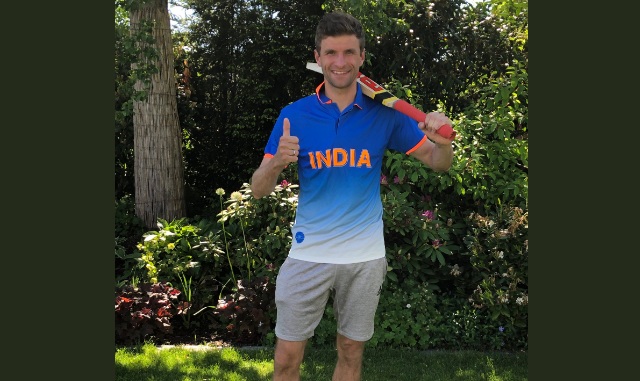 The Bayern Munich star striker posted a picture of him wearing the Indian jersey on twitter along with a post that read, “I wish all participants of the Cricket World Cup 2019 good luck & thrilling matches. Especially I cross my fingers for @imVkohli, the captain of the Indian team. He’s a fan of @DFB_Team and supported it multiple times in the past.” Mueller also added the hashtag GermanyCheersForIndia .

The Indian cricket fans, who have been waiting patiently for India to make its entry in the ongoing cricket world cup, could not contain their excitement upon seeing the famous football star’s post for Team India’s skipper Kohli.

With all the support coming in from across the world, Mueller’s tweet has stood out the most. His tweet conveyed the message that the entire German National team is cheering for Kohli and for India. It is indeed, a great fresh start for Team India with top football stars cheering their support for India in World Cup 2019.

Indian skipper Virat Kohli replied to German footballer’s special message to him and Team India by retweeting the tweet with a thank you post.

Thomas Mueller showed his support for the Indian cricket team, as Indian skipper Virat Kohli has been a vocal supporter of the German national football team in the past. The skipper has also in past instances tweeted a picture of him in the German football team jersey, rooting for the German team’s win.