Global Climate Risk Index 2020: Among the top ten most affected countries, India, Germany and Japan suffered from extended periods of heatwave during 2018. 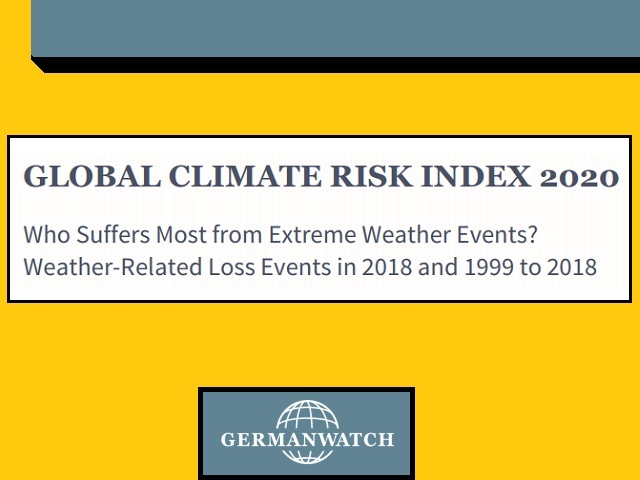 India also recorded the highest number of fatalities due to climate change in 2018. The Global Climate Risk Index 2020 is published by International Environmental think tank Germanwatch.

The Climate Risk Index 2020 published its results after assessing 181 countries and quantifying the impacts of climate change through economic fatalities.

• Japan, the Philippines and Germany were found to be the most climate-affected countries in 2018 followed by Madagascar, India and Sri Lanka. The heatwave was one of the major causes of damage in 2018.

• Among the top ten most affected countries, India, Germany and Japan suffered from extended periods of a heatwave during 2018.

• Japan topped the list of the most affected countries in 2018. The country was hit by three exceptionally strong extreme weather events during the year:

1. Torrential rainfall from July 6-8 resulting in flash floods and mudslides, killing more than 200 people and damaging over 5000 houses, leading to the evacuation of 2.3 million people.

2. Severe heatwave from mid-July to August 2018 led to 138 fatalities and over 7000 people were hospitalized due to heat strokes and heat exhaustion

3. Typhoon Jebi in September 2018 broke several historical records for sustained winds in Japan, causing economic damage of over US$ 12 billion.

• The Philippines was hit by Typhoon Mangkhut in September 2018, which was categorized as a category 5 typhoon, the most powerful typhoon recorded worldwide in 2018. The typhoon affected more than 250 000 people across the country.

• Germany experienced the second hottest year due to a severe heatwave. The period between April and July 2018 was the hottest-ever recorded in the nation with temperatures 2.9°C above average. It resulted in the death of 1234 people. The nation also witnessed severe drought in October 2018 due to less rainfall, which resulted in a massive decline in harvest.

• Madagascar became victim to Cyclone Ava in January 2018 and Cyclone Eliakim in March 2018, which together temporarily displaced around 70000 people, forcing them to seek refuge in relief camps.

• India was severely affected by the yearly monsoon season between June-September 2018, especially its southern state of Kerala where over 324 people died of drowning or got buried under landslides after one of the country’s worst floods flooded almost the entire state, leaving over 220000 people displaced with 20000 houses and 80 dams destroyed.

• Sri Lanka was also affected by severe monsoon rains in May 2018, which affected almost 20 districts, especially in the south and west coast.

• Kenya and Rwanda ranked 7 and 8 were also affected by severe monsoon rains, resulting in flooding in several areas and displacement of a large number of people.

• Canada saw its lowest temperature in 100 years in the beginning of 2018 and then record high temperatures in April 2018, which melted heavy snowpacks, causing the rivers to overflow. The nation also saw its worst wildfire season.

Besides seeing one of the worst floods in Kerala, India’s east coast was hit by two cyclones - Titli and Gaja in October and November 2018. The cyclones left around 450000 without electricity.

The Global Climate Risk Index 2020 analyses the extent to which countries and regions have been affected by weather-related events such as severe rainfall, storms, floods and heatwaves.

The index highlights the existing vulnerabilities that may increase as extreme events become more frequent or severe due to climate change.

The Index stresses on the level of vulnerability of nations to severe climate events, which they should view as warnings for more frequent or severe events in the future.