Global Talent Competitive Index 2020 showcased an improvement of eight positions in India's ranking as compared to the last year. 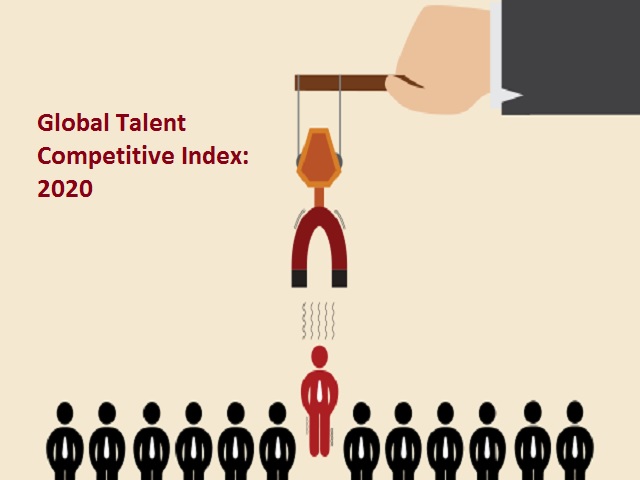 Global Talent Competitive Index (GTCI) 2020 has been released at the annual meeting of the World Economic Forum (WEF) on January 22, 2020. INSEAD Business School released the GTCI report with the help of Google and Adecco Group.

This year India climbed eight ranks and secured the 72nd rank in the index. Switzerland is in the first place while the USA and Singapore grabbed the second and third positions respectively. This index shows the ability of countries to make the world progress, retain and attract talent. They are ranked based on their abilities.

• India has secured 72nd place in the list while last year India was ranked 80th in Global Talent Competitive Index.
• Kazakhstan, India and Sri Lanka have occupied the top 3 spots in the Central and South Asia region.
• According to the GTCI, India's biggest challenge is to attract talent and retain them in the country. India got 92nd and 95th place respectively in this category.
• India’s Vocational and Technical Skill score is 76 while secured 113th place in the Mid-Level Skills list.

• Switzerland secured the first position while the USA is on second and Singapore got third place.
• Among the top ten countries, Sweden ranked fourth, Denmark fifth, Netherlands sixth, Finland seventh, Luxembourg eighth, Norway ninth and Australia 10th.
• China ranked 42nd, Russia at 48th, Brazil secured 80th while South Africa grabbed the 70th position in the list.
• GTCI gives ranking based on six indicators – attract, retain, enable, grow, vocational skills and global knowledge skills.
• The GTCI is an input-output based ranking system that takes ‘what does the country produce and acquires’ as input and ‘result from the skill’ as output.