Developed by the Indian Space Research Organisation (ISRO), the GSAT-11 was launched on the Ariane 5 VA-246 rocket from Kourou Launch Base, French Guiana.

The Ariane 5 also lifted off South Korea’s GEO-KOMPSAT-2A satellites. Ariane 5 is one of three launch vehicles operated by Arianespace along with Soyuz and Vega. 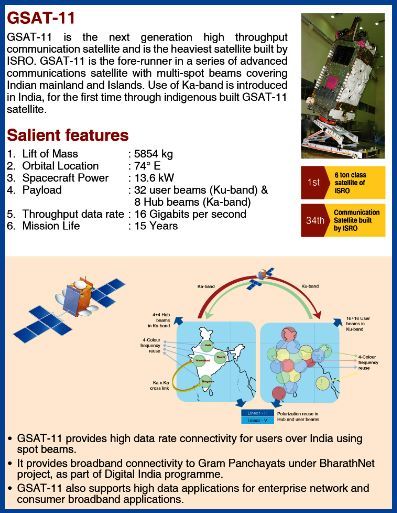 When GSAT-11 would become operational?

• After a 30-minute flight, GSAT-11 separated from the Ariane 5 in an elliptical Geosynchronous Transfer Orbit.  The achieved orbit was very close to the intended one.

• Post-separation, ISRO's Master Control Facility in Karnataka took over the command and control of GSAT-11.

• The scientists will now undertake phase-wise orbit-raising manoeuvres to place the satellite in the Geostationary Orbit (36000 km above the equator) using its on-board propulsion systems.

• GSAT-11 will be positioned at 74-degree east longitude in the geostationary orbit.

• Two solar arrays and four antenna reflectors of GSAT-11 will be deployed in orbit.

• The satellite will be operational after the successful completion of all in-orbit tests.