Exit Polls 2019 of Haryana Assembly: BJP and Congress could give each other a neck and neck fight in Haryana, as per the  India Today-Axis My India pollster. The Axis Exit Poll predicts close numbers for the ruling BJP and Congress parties; BJP is projected to win 32-44 and Congress could get 30-42 seats. Though most of the pollsters such as Jan Ki Baat and C Voter projected a clean sweep victory for Bhartiya Janata Party in Haryana assembly, the Axis My India forecasts Hung Assembly in the state. It will be interesting to watch the final outcome when the counting of votes takes place tomorrow on October 24, 2019.

Haryana Exit Polls predict BJP's landslide victory in Haryana with the vote share of 44 per cent, as per ABP C Voter pollster. As per the Haryana Exit Polls 2019, Chief Minister Manohar Lal Khattar is all set for a comeback by winning the Haryana Assembly Election 2019 from Karnal Constituency. On the other hand, Jan Ki Baat exit poll predicts that Congress' Bhupinder Singh Hooda might win from Garhi Sampla-Kiloi constituency.

The Polling in Haryana concluded successfully at 6:00 PM on October 21, 2019. Over 60 per cent voter turnout was witnessed this year. Soon after the conclusion of the polling, the pollsters revealed the exit polls around 6:30 PM. Times Now Poll of Polls predicted that BJP  could showcase a clean sweep victory in Haryana by winning 71 seats. On the other hand, Jan ki Baat exit poll predicts BJP to win 52 - 63 seats. 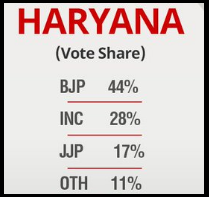 Pollsters such as Axis My India, Jan Ki Baat and others begin telecasting their poll predictions soon as per the guidelines laid by the Election Commission of India under Section 126A of the Representation of the People’s Act, 1951. As per the said Act, exit polls can be telecasted only half an hour after the voting ends.