Varaha vessel can stay in the sea without replenishment for 20 days. 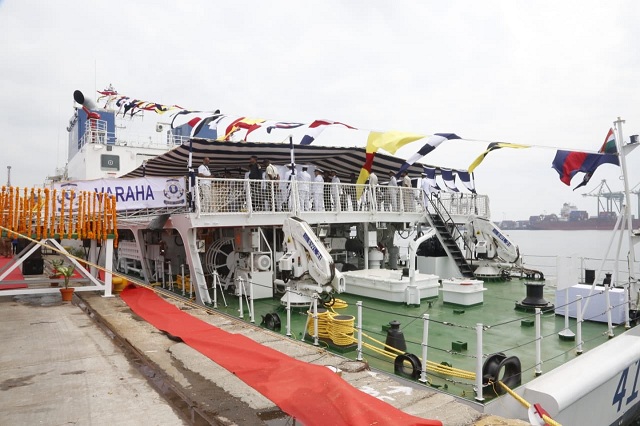 The Defence Minister was on a two-day visit to Chennai. He attended the Investiture Ceremony of the Indian Coast Guard on the first day of his visit. While speaking during the commissioning of ICGS Varah on his second day, the Defence Minister said that the ship is well equipped with all modern technology and facilities that are required by the Indian Coast Guard to ensure maritime security. 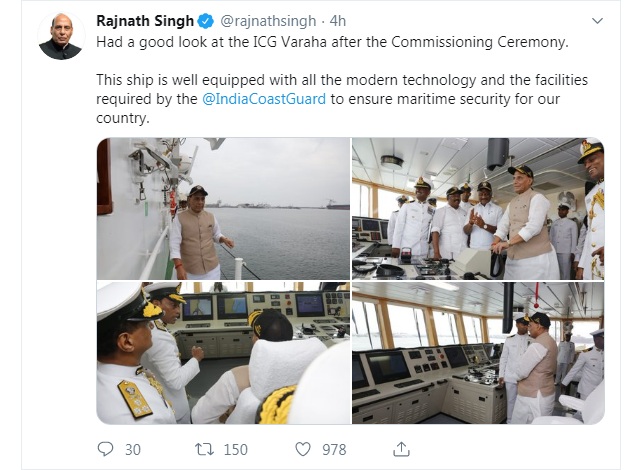 'Varaha' is the fourth in the series of seven 98-meter offshore patrol vessels. It has been indigenously designed and built by Larsen & Toubro (L&T).

The name ‘Varaha’ refers to Lord Vishnu’s third incarnation, in which he incarnated as a boar to rescue Goddess Earth from the ocean by lifting her on his tusks.

The OPV is equipped with a 30-mm gun and a 12.7mm gun to enhance the fighting efficiency of the vessel. The vessel also has the capability of carrying limited pollution response equipment to contain oil spill at sea.

Varaha carries four high-speed boats including two rigid hull inflated boats for search and rescue, boarding, law enforcement and maritime patrol. The vessel can stay in the sea without replenishment for 20 days.

Varaha is propelled by two engines. The vessel displaces 2,100 tonne and is capable of achieving a maximum speed of 26 knots and endurance of 5000 nautical miles.

Commanded by Commandant Dushyant Kumar, ICGS 'Varaha' crew will include 14 officers and 89 crew members. The vessel will be based at New Mangalore and will be under the administrative and operational control of the Coast Guard Commander (West) Region.

Speaking the commissioning of ICGS 'Varaha', the Defence said that the Indian forces including the Army, Navy and the Airforce are prepared for any kind of security challenges.