A 24-member delegation of the Chinese Defence Ministry led by State Councillor and Defence Minister General Wei Fenghe is on a four-day visit to India. The visit comes exactly a year after the 73-day military stand-off at Doklam. 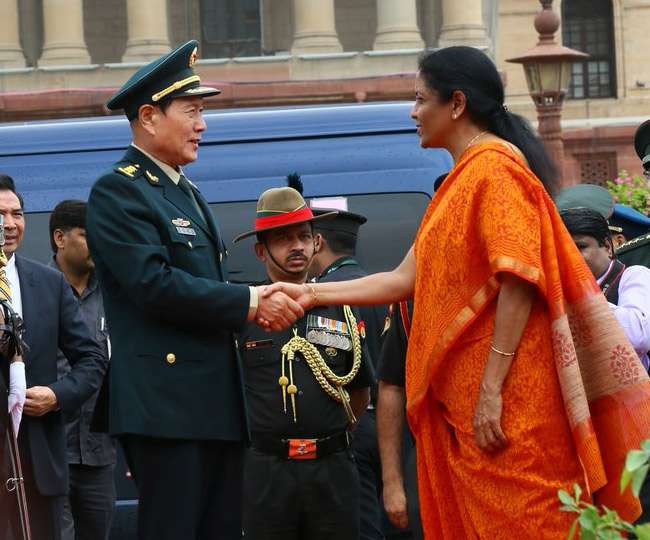 India and China on August 23, 2018 decided to work towards a new bilateral Memorandum of Understanding (MoU) on Defence Exchanges and Cooperation to replace the MoU signed in 2006.

The decision was taken during a meeting between Defence Minister Nirmala Sitharaman and her Chinese counterpart, General Wei Fenghe.

A 24-member delegation of the Chinese Defence Ministry led by State Councillor and Defence Minister General Wei Fenghe is on a four-day visit to India. The visit comes exactly a year after the 73-day military stand-off at Doklam.

• Both the two sides primarily focused on implementing decisions taken at the Wuhan Summit in April 2018 by Prime Minister Narendra Modi and Chinese President Xi Jinping which included enhancing strategic communication between the two armies.

• They agreed to increase interactions between their military at multiple levels to avoid Doklam-like standoffs along the disputed border.

• The two sides also decided on early operationalisation of the proposed hotline between the two armies as part of the confidence building measures.

• The issue of restarting ‘Hand in Hand’ anti-terrorist exercise also came up during the meeting. The exercise is held every year alternatively in China and India, however, it could not be held in 2017 in China due to Doklam tension.

• The decisions, taken during the meeting, were aimed at building mutual trust between the two armies guarding the 3500 km Sino-India border.

• Sitharaman talked about security challenges India has been facing because of cross-border terrorism and the need for ensuring freedom of navigation and over flight in South China Sea.

• She also raised the issue of USD 46 billion China-Pakistan Economic Corridor which is passing through Pakistan-occupied Kashmir as it violates India's sovereignty.