India and Ethiopia agreed on expanding the bilateral agenda especially on economic, defence, digital, Science and Technology, and cultural cooperation. 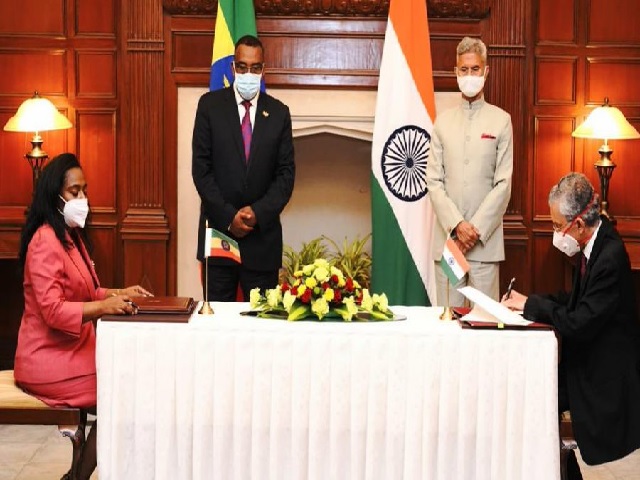 India and Ethiopia on February 19, 2021, signed two agreements on visa facilitation and leather technology. Demeke Mekonnen Hassen, Ethiopian Deputy Prime Minister, and Foreign Minister is on a four-day visit to India, since February 16.

The agreements between both the countries were signed in the presence of the Deputy Prime Minister and Foreign Minister of Ethiopia, Demeke Mekonnen Hassen, and the External Affairs Minister of India S Jaishankar.

The External Affairs Minister while sharing the news on his official Twitter account mentioned that he had a useful and productive discussion with the Ethiopian minister on a range of regional and bilateral issues.

The two ministers, while signing the agreement, also agreed on expanding the bilateral agenda of India and Ethiopia especially on economic, defence, digital, Science and Technology, and cultural cooperation. The Ethiopian Minister also briefed in detail about the ongoing situation in the region.

Welcomed DPM&FM @DemekeHasen of Ethiopia.Useful &productive discussions on a range of bilateral&regional issues. Agreed to expand our bilateral agenda esp defence,economic, S&T,digital &cultural cooperation. Appreciated his detailed briefing on the current situation in the region pic.twitter.com/YYDtnbIHdU

Both India and Ethiopia enjoy friendly and close relations. India supports the developmental efforts of Ethiopia and Ethiopia has been supporting India’s interests such as its claim of being a permanent member of the UN Security Council.

They also share a common understanding of the need for the reform of the UN, cross-border international terrorism, and the significance of action on climate change.