Following are the five joint declarations of intent: 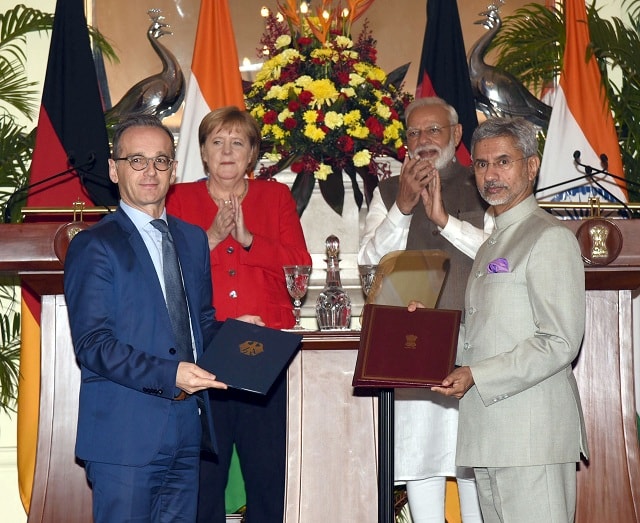 Following are the 17 India-Germany MoUs:

The two leaders agreed to work together to foster cooperation on AI technologies to promote innovation and sustainable development.

They reaffirmed the importance of building a Digital Partnership to boost regular interaction towards collaboration on the next-generation technologies. Both nations aim to build a collaborative partnership, recognizing the increasing integration of hardware and software in developing AI solutions for societal benefits.

India and Germany have both drawn out their country-specific strategies on AI and recognise its potential for research and innovation as well as on society in general. The key focus areas include - Health, Mobility, Environment and Agriculture.

The two countries recognized the need for further cooperation by fostering multidisciplinary research and development in AI by sharing expertise and best practices. Towards the same, Germany’s Education Ministry and India’s Department of Science and Technology agreed to organize a bilateral workshop in Berlin in 2020 through the Indo-German Science and Technology Centre to identify areas of mutual interest. 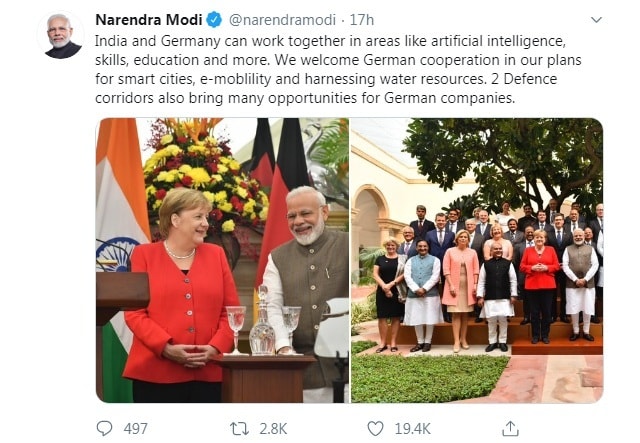 The two leaders further agreed that their digital companies will jointly work to enhance market opportunity and bilateral investments in each other’s countries. They also agreed to enable cooperation in standardization, IT-security in networked systems, testbeds and use cases, business models and B2B-platforms and on topics shaping the future digital ecosystems for Industry 4.0.

The two nations also welcomed the proposal to conduct boot camps for Start-ups to help create an ecosystem that will promote innovation and foster entrepreneurship in digital platforms.

The German Chancellor and Indian PM also underlined their determination to enhance bilateral trade and investment and deepen negotiations on a balanced Free Trade Agreement between India and the EU.

They also agreed to intensify efforts towards an investment protection agreement between the EU member states and India. Germany announced that it will grant investment guarantees for eligible direct investments by German companies in India.

The leaders also welcomed the continuation of the German Indian Startup Exchange Program (GINSEP) and the introduction of a new German Accelerator (GA) programme "Next Step India” that could lead to a full GA programme for the German Startups in India.

The two sides also spoke on coming to a common conclusion if the future course of action in undertaking High-Speed and Semi-High-Speed-Rail-projects in India.

In the area of space cooperation, the leaders agreed to further strengthen their cooperation in the areas of earth observation and disaster management.

Germany further expressed support for the Coalition For Disaster Resilient Infrastructure (CDRI) and announced its intention of joining it formally and working with India and other international partners for climate and disaster-resilient and sustainable infrastructure investments.

The leaders underlined the need for close cooperation in the field of energy and transport transition in India and Germany to capitalize on the economic potential of climate protection.

They also expressed concern regarding the inadequate global level of climate action and called on all countries to step up their efforts. The two nations further stressed on the need to undertake climate actions based on the principles of equity and common but differentiated responsibilities and respective capabilities. They also reiterated their commitment to constructively work with all partners towards a successful COP25.

The two leaders agreed to promote the teaching of modern Indian languages in German educational institutions and to evaluate the impact of traditional medicine, especially Yoga and Ayurveda for the benefit of people. They also agreed to hold the 1st India-Germany Consular Dialogue at an early date.

Germany would also be establishing a Schengen-Visa-Centre in Mumbai within the German Consulate General from August 2020 to facilitate the smooth issuance of visas.

India and Germany agreed to closely cooperate during the Indian G20 Presidency and the German G7 Presidency in 2022. They also reaffirmed their commitment towards the creation of a stable, united, prosperous and peaceful Afghanistan.

In the area of terrorism, the two leaders called upon all countries to root out all terrorist havens in the world and disrupt the terrorist networks and financing channels and stop their cross-border movement. They also underlined the need for all countries to ensure that their territory is not used as launch pads for terrorist attacks on other countries.

To present a united front in fighting terrorism, the leaders called for the adoption of the Comprehensive Convention on International Terrorism (CCIT) in March 2020.

Also read: 5G in China: Know about its speed and other benefits