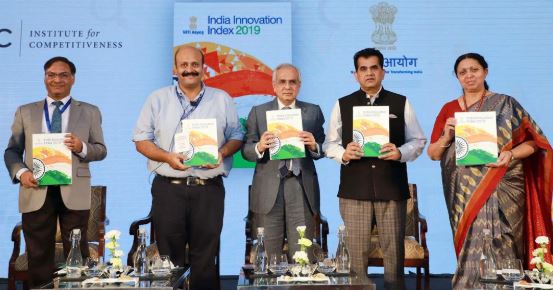 India Innovation Index (III) 2019 has been released by NITI Aayog on October 17, 2019. The index highlights that Karnataka is the most innovative state in India however, Telangana, Tamil Nadu, Haryana, Maharashtra, Uttar Pradesh, West Bengal, Kerala, Andhra Pradesh and Gujarat are among top ten in the list.

Delhi and Sikkim have secured top scores among union territories and North-Eastern hill state list respectively. Some other states like Tamil Nadu, Delhi, Maharashtra and Karnataka are among the most efficient states who translated inputs into outputs.

• NITI Aayog with Institute for Competitiveness as the knowledge partner has released the India Innovation Index 2019.
• The scores are an attempt to create an extensive framework for the continual evaluation of the innovation environment of states and union territories.
• The innovation index 2019 highlights that the innovation ecosystem of the country is strong in south and western parts of India.
• Also, it was found that there are west-south and north-east divide across the country in the area of innovation.
• Karnataka emerged on the top in Infrastructure, Knowledge Output, Knowledge Workers and Business Environment.
• However, Maharashtra was the best performer in the dimension of Enablers. It highlighted that Maharashtra provides the best environment for innovation however the state appeared third in overall innovation index.

Parameters of the ranking

• NITI Aayog and Institute for Competitiveness prepared the India Innovation Index 2019 on the basis of its two dimensions – Performance and Enablers.
• The Enablers are the factors that underpin innovative capacities, grouped in five pillars: (1) Human Capital, (2) Investment, (3) Knowledge Workers, (4) Business Environment, and (5) Safety and Legal Environment.
• The Performance dimension captures benefits that a nation derives from the inputs, divided in two pillars: (1) Knowledge Output and (2) Knowledge Diffusion.