India has issued a travel advisory for Turkey, asking Indian nationals to exercise utmost caution while travelling to Turkey.

The Indian government has been receiving several queries from Indian nationals on travelling to Turkey in view of the situation in the region. In response to the same, the Indian embassy in Ankara tweeted a travel advisory for Turkey.

The travel advisory requested the Indian nationals to exercise caution while travelling to Turkey even though there haven’t been any reports of untoward incidents in the country involving Indian nationals so far.

Following is the tweet by the Indian embassy in Turkey: 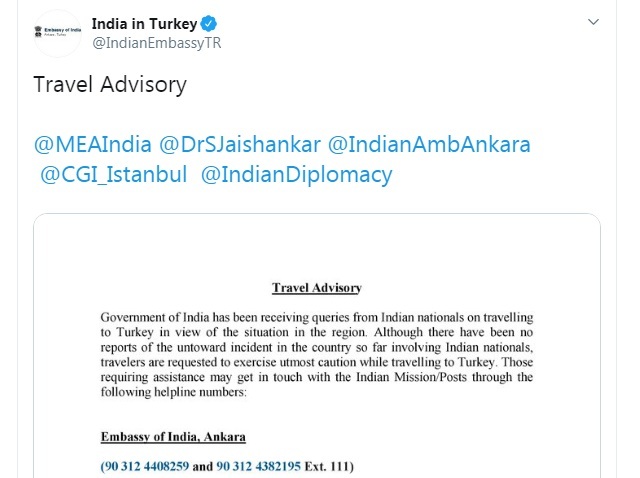 The Indian embassy also shared two helpline numbers for travelers in case they require any assistance. The helpline numbers belong to the Indian Embassy in Ankara and the Consulate General of Istanbul. The numbers are as follows:

The relations between India and Turkey took a downward turn after the 73rd UN General Assembly session in September 2019, when Turkish President Recep Tayyip Erdogan spoke in favour of Pakistan and made strong statements against India’s decision of withdrawing the special status of Jammu and Kashmir.  India had strongly condemned the statements.

Turkey had also supported Pakistan during the Financial Action Task Force (FATF) plenary meeting, which took place in Paris, France earlier this month, a move that again went against India.

India had also issued a statement on October 11, officially condemning Turkey’s unilateral military offensive in north-east Syria and urging it to exercise restraint and respect the sovereignty and territorial integrity of Syria.

India said in its statement that Turkey’s actions can undermine stability in the region and the fight against terrorism and it also has the potential for causing humanitarian and civilian distress. India had urged Turkey to go for peaceful settlement of all issues through dialogue and discussion.