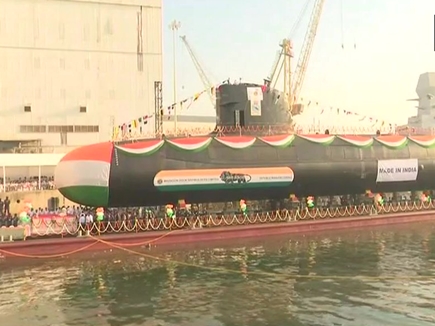 The submarine was launched by Reena Lanba, President of Navy Wives Welfare Association following the recitation of Sanskrit shlokas from the Atharva Veda and traditional ceremonies associated with the launch of naval platforms.

Following the launch, the submarine was towed to Mumbai Port Trust for separation from the pontoon. INS Karanj will now undergo rigorous trials and tests, both in harbour and at sea before it is commissioned into the Navy.

• These submarines have the ability to launch a crippling attack on the enemy using precision guided weapons. The attack can be launched with both torpedoes and tube launched anti-ship missiles, while underwater or on surface.

• The submarine is designed to operate in all theatres with means provided to ensure interoperability with other components of a Naval Task Force.

Background
The construction and Transfer-of-Technology for six Scorpene submarines in series has been undertaken by Mazagon Dock Shipbuilders Limited and Naval Group (formerly DCNS) of France as ‘Collaborator’.