Colin Trevorrow, Director of Jurassic World, tweeted expressing his grief on the passing of Irrfan Khan. He remembered Irrfan Khan as a thoughtful man who found beauty in the world around him, even in pain. 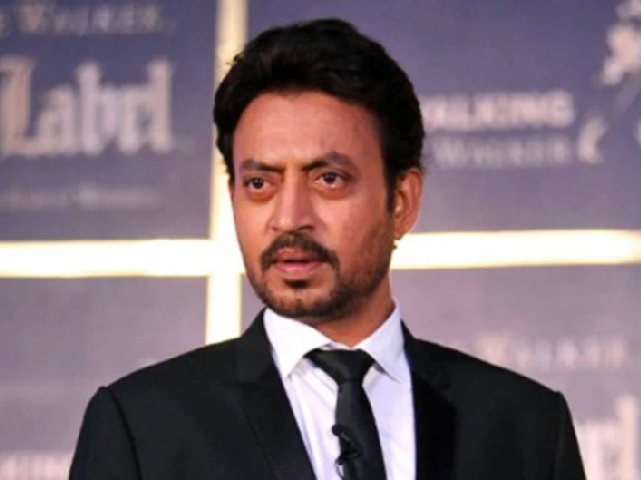 Renowned Bollywood actor Irrfan Khan passed away at Kokilaben Hospital in Mumbai on April 29, 2020. The actor was reportedly battling a rare cancer. He breathed his last surrounded by his family. Irrfan Khan was considered as one of the finest actors of Indian cinema and as one of its leading faces in the West.

The actor was admitted to Mumbai’s Kokilaben Dhirubhai Ambani Hospital earlier this week. He was taking treatment for colon infection and had been unwell since a long time. The actor had revealed in March 2018 that he had been diagnosed with a rare form of cancer, neuroendocrine tumour. The tumour can target various parts of the body.

Irrfan Khan is survived by his wife Sutapa and two sons- Ayan and Babil. He lost his mother just three days ago but could not attend the funeral due to the lockdown. His mother was in Jaipur. His last film,  ‘Angrezi Medium’ had released just before the lockdown was announcement. The film had to stop playing after theatres were shut down due to the coronavirus pandemic. ‘Angrezi Medium’ was later released on online platforms. It is available on Disney+ Hotstar.

The President and Prime Minister of India condoled the passing of the mega actor through tweets. The Prime Minister tweeted saying that the actor's demise is a loss to the world of cinema and theatre.

The President of India, Ram Nath Kovind tweeted saying that he was saddened by the untimely demise of the noted actor. The Indian President remembered Irrfan Khan as a rare talent and a brilliant actor.

Colin Trevorrow, Jurassic World (2015) Director, also tweeted expressing his grief on the passing of the actor. He remembered Irrfan Khan as a thoughtful man who found beauty in the world around him, even in pain. 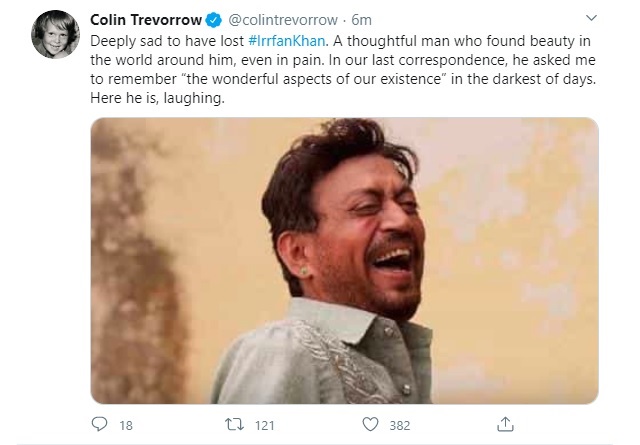 Filmmaker Shoojit Sircar condoled the actor's passing through a tweet that read, "My dear friend Irfaan. You fought and fought and fought. I will always be proud of you.. we shall meet again. "

Amitabh Bachchan also tweeted saying that it is the most disturbing and sad news.  He remembered the late actor as a gracious colleague and a prolific contributor to the World of Cinema.

Akshay Kumar also expressed his grief through a tweet. He tweeted saying that Irrfan Khan was one of the finest actors of their time.

Priyanka Chopra also took to twitter to express her condolences. Her tweet read "Your talent forged the way for so many in so many avenues.. You inspired so many of us. Irrfan Khan you will truly be missed." 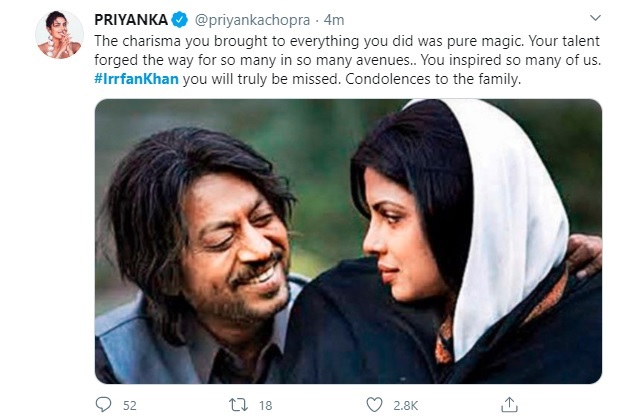 Irrfan Khan's Lunchbox co-star Nimrat Kaur tweeted "heartbroken" after the news of his passing broke. Her subsequent tweet read, "words fail to describe my sense of shock and horror to learn about Irrfan Khan’s passing away."

While the world is filled with grief with the shocking passing of the renowned actor Irrfan Khan, many voiced that it was too early for the actor to pass away. The actor's acting career was at its peak and he probably had much more to offer to the world of cinema before he was sadly taken away.

Irrfan Khan is credited with bringing a new wave in the Indian cinema with movies like 'The Lunchbox', 'Piku' and ‘Maqbool’.  Some of his best performances include his lead roles in films like 'Hindi Medium', "The Namesake',  ‘Maqbool’, ‘Paan Singh Tomar’, 'Talvar' and ‘Piku’ and supporting roles in 'Slumdog Millionaire', 'Haider', 'Life in a... Metro' and 'Gunday'.

He had also acted in Hollywood films including the A Mighty Heart, Amazing Spider-Man, Jurassic World, Life of Pi and Inferno. His last appearance was in 'Angrezi Medium', a sequel to Hindi Medium, which released in March 2020, just a week before the announcement of the nation-wide lockdown due to COVID-19.

The actor was honoured with the Padma Shri, fourth highest civilian award, for his outstanding contribution in the field of arts in 2011.  He also received the National Award for his role in ‘Paan Singh Tomar’ in 2013.

Irrfan Khan was born to a Muslim family in Rajasthan. In his initial days, the act along with his best friend, Satish Sharma was interested in pursuing cricket. Irrfan Khan was also selected for the CK Nayudu Tournament for emerging players, the stepping stone for first class cricket in India. However, the actor missed the tournament due to lack of funds.

The actor confirmed in March 2018 that he was suffering from neuroendocrine tumour. He went to the United Kingdom for treatment and returned to India a couple of months back.