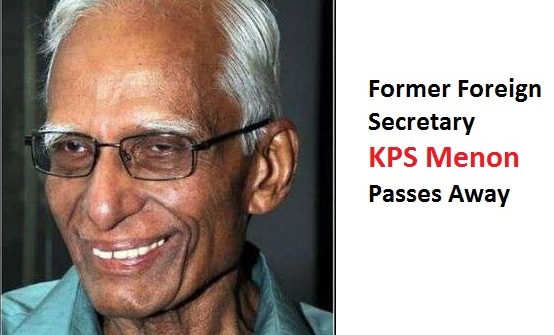 • He completed his early education at Doon School, Dehradun then St Stephen’s College, Delhi, and Oxford. However, he joined the Indian Foreign Service in 1951 before completion of his education.
• KPS Menon (junior) was best known for his services as an ambassador to various countries, including Bangladesh, Egypt, Japan and China.
• KPS Menon (junior) had served as the Foreign Secretary of India from 1987 to 1989.
• He was a bureaucrat who had contributed towards getting India's foreign policy accepted and recognised worldwide.
• He was a 1951 batch Indian Foreign Service (IFS) officer.

KPS Menon (Senior) was the first Foreign Secretary of Independent India from 1948 to 1952. Earlier, he was Diwan (Prime Minister) of Bharatpur State before India’s Independence. Later, he was appointed as an ambassador of India to the Soviet Union from 1952 to 1961, and then ambassador to the People's Republic of China. KPS Menon (senior) was awarded the Padma Bhushan in 1958 and the Lenin Peace Prize in the 1950s. He passed away on November 22, 1982, at the age of 84 in Kerala.