Delhi Assembly Election Result 2020: Arvind Kejriwal's AAP is set for a clean sweep in Delhi with at least 63 out of the total 70 assembly seats. Check out 13 key constituencies of Delhi and the winning candidates. 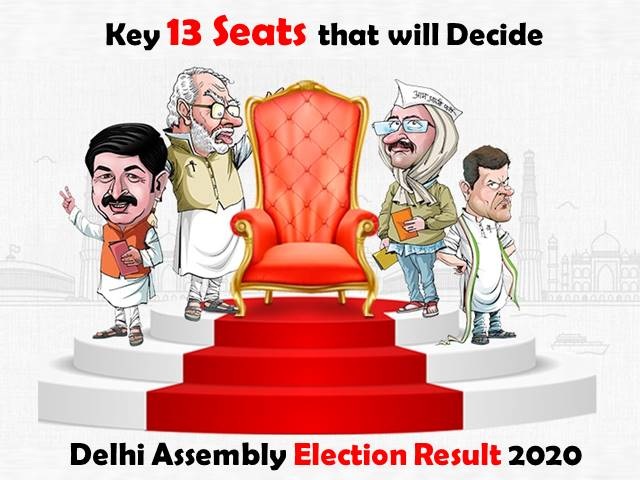 Delhi Assembly Election Result 2020– Key 13 Seats: After a politically charged campaign and 62.59% polling on 8th February 2020; Delhi is all ready to get a new Chief Minister. With the incumbent Arvind Kejriwal being favoured by pollsters to retain power, it seems like Aam Admi Party is expected to comfortably form a government in Delhi. However, BJP is yet to give up its hope; in fact BJP Delhi Chief Manoj Tiwari has made a startling claim that his party will come to power with 48 seats, which has left many surprised. On the other hand, Congress - the party which ruled the state for three consecutive term, is unlikely to give a tough contest to either of them.

But, despite that the exit polls say; there are some seats that have always defined the way Delhi Assembly Election Results go. These key 13 seats have, traditionally, played an important role in deciding the next Chief Minister of Delhi. So, let’s check out the important seats / constituencies and their demographics along with previous election records to decode how they can swing this election?

New Delhi is probably the most watched assembly constituency seat in the Delhi Assembly Election Result 2020. The seat has given Delhi it’s last three Chief Ministers i.e. 2008 – Sheila Dixit and Arvind Kejriwal in 2013 and 2015 elections and has the history of electing the Chief Minister of the State for 5 consecutive terms now. Incidentally, New Delhi seat also marked the advent of AAP and Arvind Kejriwal in the Delhi Politics, when he defeated Sheila Dixit - the longest-serving chief minister of Delhi, as well as the longest-serving female chief minister of any Indian state. For 2020 elections, New Delhi Seat has maximum number of candidates i.e. 28 contesting against incumbent Delhi CM Arvind Kejriwal.

Latest Update: Arvind Kejriwal has maintained a clear lead in the constituency. The two-time Chief Minister of Delhi leads by a margin of 19279 votes.

Another iconic seat as far as Delhi Election Results 2020 are concerned is Chandni Chowk. The seat will see AAP turncoat and Incumbent MLA Alka Lamba seek re-election today; however, under the Congress symbol. Prior to joining AAP, Alka Lamba has had long standing association with Congress as a member of All India Congress Committee and Delhi University Students’ Union President from NSUI. Interestingly, Alka was also seen as an active participant in the anti-CAA protests at Jama Masjid, which was an important issue for the Delhi Elections.

In 2008 and 2013, the seat was won by Congress, while in 2015, Alka Lamba won it under AAP’s banner. In terms of demographic composition, the constituency has primarily Hindu voters with domination of traders. Chandni Chowk will see a bi-polar contest between Alka Lamba (INC) and Parlad Singh Sawhney (AAP).

Okhla has been the centre of the political storm as far as anti-CAA protests and agitation, which was a critical important issue in Delhi Elections that polarized the election campaign. Shaheen Baug, where anti-CAA protests have been going on since 15th December, and Jamia where police against student protesters, brought the anti-CAA protests to the limeline;  both these key locations fall under Okhla Assembly Constituency. At Okhla, AAP’s Incumbent MLA Amanatullah Khan is pitted against BJP’s Bhrama Singh, whereas, the Congress has fielded former Rajya Sabha MP Parvez Hashmi.

Demographically, the seat has domination of Muslim community along with Gujjar Community in nearby villages of Madanpur Khadar. The constituency also has urban middle class pockets such as Sarita Vihar and Jasola Vihar. AAP and Congress candidates, both of whom are Muslim will get support from Muslim Dominated areas of Shaheen Baug and Jamia, while BJP’s Bhrama Singh, who is a Gujjar will see support from voters from Madanpur Khadar.

Rajinder Nagar is one of the few constituencies which might see an interesting contest between all three parties. Part of the West Delhi area, Rajinder Nagar has charming AAP spokesperson Raghav Chadha pitted against BJP’s Sardar RP Singh in a close battle. On the other hand, Congress has fielded former DUSU President and perhaps the youngest candidate in this election, Rocky Tuseed.

For 2020 election, AAP dropped its sitting MLA Vijender Garg Vijay who defeated BJP’s Sardar RP Singh in 2015, and picked Raghav Chadha in his place, which might lead to some backlash for the party. At the same time, Raghav Chadha – being a Punjabi-Khatri, will have the demographic advantage as the community forms sizable voter base in the constituency.

Aam Aadmi Party’s Atishi – the face of transformation of Delhi’s Government School, has contested Delhi Election 2020 from Kalkaji. She goes face to face against Delhi Congress Chief Subhash Chopra’s daughter Shivani Chopra in this key constituency. BJP has fielded Dharamveer Singh from this constituency. What makes Kalkaji an interesting constituency is its demographic mix. The seat has a mix of Punjabi refugees, people from Eastern UP and Bihar along with a good chunk of Bengalis; this forms the core of Congress and BJP’s traditional vote bank.

In the last three elections, Kalkaji has chosen all the three key parties; in 2008 Congress’s Subhash Chopra won the seat, while in 2013 Harmeet Singh of BJP won this seat. In 2015, Avtar Singh Kalkaji of AAP won in this seat by defeating Harmeet Singh Kalka of BJP.

Gandhi Nagar is one of those seats on which Congress would be pinning its hope. The grand old party has fielded Former Delhi Cabinet Minister and Delhi Congress Pradesh Committee Chief Arvinder Singh Lovely from this seat. Before 2015, Lovely has represented Gandhi Nagar 4 times before losing it in 2015 to Anil Bajpayee who was contesting on AAP ticket. However, this time around, the incumbent MLA has switched to BJP while AAP has fielded Naveen Chaudhary. In opinion polls, Congress’s Arvinder Singh Lovely has emerged as a popular leader among sizable population of Punjabi and Trader community of the constituency.

Latest Update: BJP's Anil Kumar Bajpai is leading by a margin of 5798 votes.

Model Town, which is part of the North Delhi district, will see BJP’s loudmouth Kapil Mishra, a former AAP minister, take on AAP’s Akhilesh Pati Tripathi and Congress’s Akanksha Ola. The seat is likely to see a triangular contest as Congress candidate Akanksha Ola is daughter of veteran Congress leader Kanwar Singh who has represented the constituency thrice.

During the Delhi Assembly Election campaign in January, BJP candidate Kapil Mishra faced a 48 hour ban from the Election Commission for his tweet that equated Delhi elections to India – Pakistan contest. Apart from this incident as well, Kapil Mishra has a history of making communal and incendiary comments.

Latest Update: AAP's Akhilesh Pati Tripathi has won by a margin of 11133 votes.

Traditionally a BJP stronghold, Tughlakabad is all set to see a bi-polar contest between BJP’s Vikram Bidhuri and AAP’s siting MLA Sahi Ram Pehalwan. Congress has fielded Shubham Sharma from the seat. What makes  Tughlakabad an interesting contest is its demographic composition; which primarily consists of dominant Gujar community. Both Pehalwan and Bidhuri belong to the same community. BJP seems to have a slight advantage inn Tughlakabad as Vikram Bidhuri is nephew of BJP MP Ramesh Bidhuri – who won the seat in 2008 and 2013 elections.

Another constituency which is likely to see a three cornered contest on Delhi Election Result Day is Mustafabad – one of the three seats which BJP won in 2015. BJP’s win from Mustafabad in 2015 came across as a surprise to many because demographically it is a Muslim dominated seat. However, post-poll analysis shows that in 2015, the Muslim votes were divided between Congress and AAP which gave BJP an advantage.

For 2020 election, BJP’s Jagdish Pradhan seeks re-election and is pitted against Haji Yunus of AAP who has been a former MLA and Congress party’s Ali Mehndi. Congress candidate Ali Mehndi is son of former MLA Hasan Ahmad who won from Mustafabad in 2008 and 2013 elections.

BJP’s Twitter warrior Tajinder Bagga is contesting from Hari Nagar seat in West Delhi. He goes face to face against AAP’s Rajkumari Dhillion and Surender Sethi of the Congress. Traditionally, AAP has won the seat in 2013 and 2015 while Harsharan Singh Balli of BJP was elected as MLA in 2008 election.

Rohini is one of the three seats that was won by BJP in 2015 and it plans to hold on to it in 2020 as well. To work its magic, BJP has fielded its incumbent MLA Vijender Gupta, who will face off against AAP’s Nama Bansiwala and Congress candidate Sumesh Gupta. Rohini elected BJP in 2008, followed by AAP in 2015 and turned back to BJP in 2015 election in which AAP registered a landslide victory.

Latest Update: BJP's Vijender Gupta is leading by a margin of 12648 votes.

Part of East Delhi District, Babarpur will see AAP Cabinet Minister MLA Gopal Rai fight it out against BJP candidate Naresh Gaur and Congress candidate Ameshka Tripathy Jain. Traditionally, a BJP stronghold, Babarpur elected BJP candidates in 2008 and 2013 election; however gave the seat to AAP’s Gopal Rai in 2015. With a sizable population from eastern Uttar Pradesh and Bihar, Gopal Rai is likely to have a comfortable win from here.

Latest Update: Gopal Rai has maintained decent lead from the constituency. He is leading by a margin of 23263 votes.

Delhi Deputy Chief Minister and the man behind transformation of Government Schools in Delhi – Manish Sisodia will look for re-election from this important constituency based in East Delhi. AAP’s second in command Sisodia will go on to face BJP’s Ravi Negi and Laxman Rawat of the Congress. In 2008, Patparganj elected Congress candidate, but since then, in 2013 and 2015 Manish Sisodia of AAP has won the seat with convincing margin.

Latest Update: Manish Sisodia has won by a margin of 3207 votes.