A fragile truce was achieved in the African nation on January 12, 2020 when a ceasefire was agreed upon. 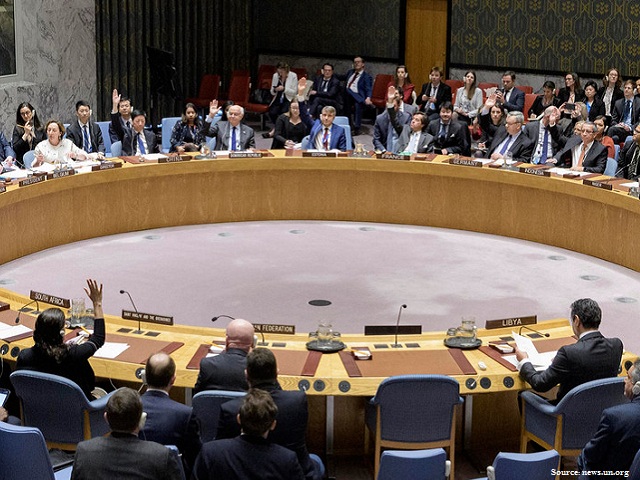 A resolution calling for a "lasting ceasefire" between the warring sides in conflict-stricken Libya was adopted by the United Nations Security Council on February 12, 2020.

The resolution, drafted by the United Kingdom, was backed by 14 UNSC members. The 15th member, the Russian Federation abstained from voting. Russia is one of the five permanent members of the council.

The resolution calls for lasting truce in Libya without any pre-conditions.

A fragile truce was achieved in the African nation on January 12, 2020, when a ceasefire was agreed upon. However, there have been reports of clashes almost daily and concern has also been expressed by nations over the involvement of mercenaries in Libya.

• The text reaffirms support for the UN Support Mission in Libya and underlines the commitments made by the international community to bring an end to the fighting in the African nation.

• It especially underlines the key role of African nations in ending the violence, especially the African Union and the League of Arab States.

• The resolution further noted all the commitments made during the Berlin conference in January including heeding to the UNSC arms embargo and ceasing all support for and withdrawing of all armed mercenary personnel.

• The resolution’s text also directs the UNSC member states to not intervene in the conflict. The text also expresses concern for the deteriorating humanitarian situation in the nation including falling living standards and insufficient provision of basic services.

• The resolution also expressed concern for the situation of refugees, migrants and internally displaced people in the nation.

Libya has been in the midst of conflict since 2011 when civil war broke out between forces loyal to long-time Libyan ruler Muammar Gaddafi and those seeking to topple his government. The civil-war neared its end when Gaddafi was captured and killed in October 2011 by NATO-backed forces.

Even after Gaddafi’s death, insurgency by his loyalists continued and there was strife between the local militia and tribes. These conflicts led to a second civil war in Libya in 2014.