He broke the previous world record by a big margin of 2 hours 6 minutes. Earlier, Belgium's Julian Denair won the race in 52 hours 30 minutes. Mayank became the first Asian to win the race and the 44th athlete in the world. 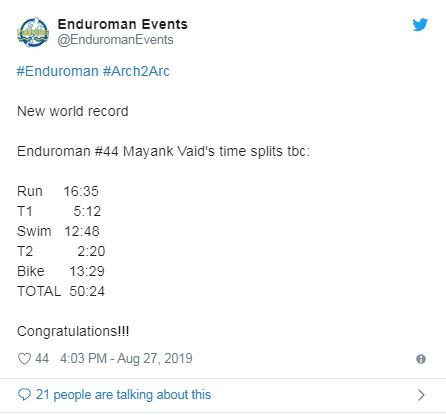 What is Enduroman triathlon?

The Enduroman Triathlon Race began from London's Marble Arch. The contestants initially ran 140 km of races. The contestants then swam 33.8 km from the Kent coast and crossed the English Channel and reached the coast of France. From here, the contestants cycled 289.7 km to finish the race in Paris.

The ‘Enduroman – Arch to Arc’ triathlon starts from the Marble Arch in London and an athlete has to reach Arc de Triomphe in Paris to successfully complete it. The long journey involves hours of running, swimming and cycling and can be exhausting if preparations or strategy is not right. Mayank Vaid became only the 44th person in the world to complete the challenging triathlon.