The National Women’s Party which has been formed with the motto of women empowerment was launched in Mumbai, Maharashtra on January 21, 2019. The party has been founded by Dr Swetha Shetty, a medical practitioner-cum- activist from Hyderabad, who would also serve as its President. 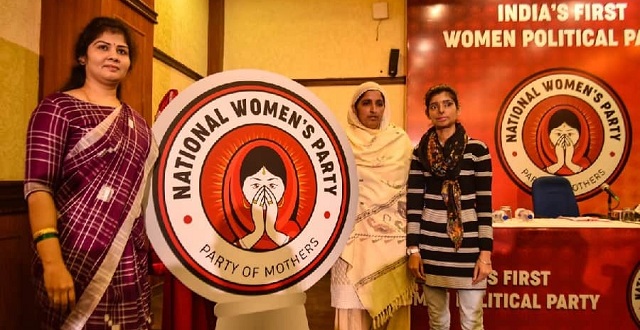 The National Women’s Party (NWP), which has been formed with the motto of women empowerment, was launched in Mumbai, Maharashtra on January 21, 2019.

The party has been founded by Dr Swetha Shetty, a medical practitioner-cum- activist from Hyderabad, who would also serve as its President. Announcing its formation, Shetty said that apart from ensuring empowerment of women, issues like getting 50 per cent reservation for women in the parliament and state assemblies and the betterment of soldiers and farmers, would be among their top priorities.

• The National Women’s Party would be contesting in 283 Lok Sabha seats, which is half of the total number of seats, in the upcoming Lok Sabha Elections.

• The party aims to succeed in its mission to guarantee equal representation in Parliament.

• The key objective behind the formation of the party is to remove gender disparity in politics.

• The process to shortlist the women candidates is currently underway.

• Besides this, the party also plans to open Youth Parliament (political schools for women) in every state for imparting practical and academic training for them.

Speaking during the party’s launch, Shetty said, “hard fact is that we live in a society where most of the political decisions are taken by men which narrows the possibility of political empowerment of women.”

She further added that the safety of women is of the utmost importance considering the rise in crimes against them and hence, the party aims to take up initiatives that will enable every girl to live a fearless life and be able to step out of her home without any impending danger.

• The battle to get reservation for women in parliament and assemblies has been going on inconclusively for the last 20 years.

• The Women's Reservation Bill or The Constitution (108th Amendment) Bill, 2008, is a lapsed bill in the Indian Parliament.

• The bill had proposed to amend the Indian constitution to reserve 33 per cent of all seats in the lower house of the Parliament, Lok Sabha and in all state legislative assemblies for women.

• The seats were proposed to be reserved in rotation and would have been determined by draw of lots in such a way that a seat would be reserved only once in three consecutive general elections.

• Though the Rajya Sabha passed the bill on March 9, 2010, the Lok Sabha never voted on the bill. The bill lapsed after the dissolution of the 15th Lok Sabha in 2014.