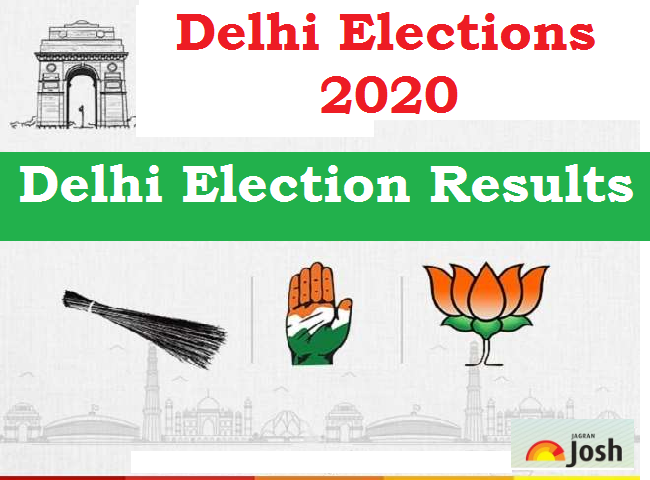 The Delhi exit poll results predicted a landslide victory for AAP with over 60 seats in the 70-seat assembly, the BJP was projected to win around 4 to 19 seats and Congress could win 0 to 1 seat. Get here the Delhi Election Result Updates:

AAP's Manish Sisodia emerges victorious in Delhi Elections 2020. Sisodia wins by a margin of over 2000 votes against the BJP candidate Ravinder Singh Negi.

Amanatullah Khan wins the Delhi Assembly Elections from Okhla constituency. Khan defeated BJP's Braham Singh by a margin of 36970 votes. Okhla is currently witnessing Anti-CAA stir in its Shaheen Bagh and Jamia Nagar regions. It will be interesting to see how AAP peacefully handles such protests.

BJP's Ravinder Singh Negi is leading ahead of AAP's Manish Sisodia by a margin of just 556 votes. The counting of votes is still going on in Patparganj constituency.

Amanatullah Khan leads in Okhla with a margin of over 13000 votes against BJP's Brahm Singh. Khan also won the 2015 Delhi assembly elections from this seat itself.

Arvind Kejriwal continues to lead in the New Delhi by a margin of over 11000 votes, leaving behind BJP's Sunil Kumar Yadav and Congress' Romesh Sabharwal .

Anil Goyal of BJP is moving ahead of BJP's SK Bagga with a vote margin of over 4300 in Krishna Nagar constituency of East Delhi. Congress' AK Walia failed to garner votes and win in the elections.

Anil Kumar Bajpai of BJP is leading in Gandhi Nagar constituency against AAP’s Naveen Chaudhary, who is trailing with a margin of over 2200 votes. Congress' move of fielding its party member Arvinder Singh Lovely failed to make its mark in the assembly elections.

Rajkumari Dhillon of AAP is leading from Hari Nagar by a margin of over 1200 votes against BJP's Tajinder Singh Bagga. Hari Nagar is Sikh-community dominated constituency.

Amanatullah Khan continues to lead from Okhla constituency with a margin of over 5700 votes. BJP's Brahm Singh is trailing as of now.

Manish Sisodia is still trailing in Patparganj by a margin of 2,183 votes against Ravinder Singh Negi of Bhartiya Janata Party.

Arvind Kejriwal is leading by a vote margin of over 6000 votes. BJP's candidate Sunil Kumar Yadav is trailing in New Delhi constituency.

Manish Sisodia is trailing in Patparganj by a margin of by 1427 votes. BJP's Ravinder Singh Negi is leading as of now.

The second round of counting of votes is over. AAP leader Manish Sisodia is leading from Patparganj by a margin of 74 votes. 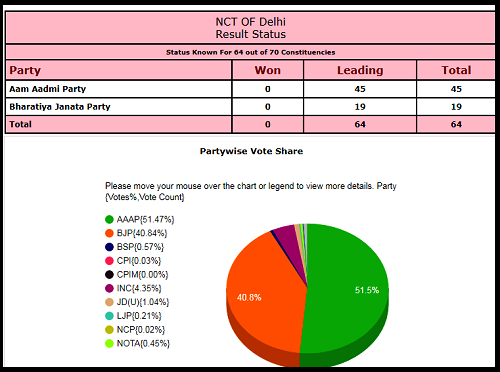 AAP leader Ram Niwas Goel is leading from Shahdara by a margin of 81 votes. BJP's Sanjay Goyal is trailing.

The results are still not clear in Okhla constituency of Delhi. As of now, AAP's Amanatullah Khan is leading in the seat.

AAP candidates are now leading in New Delhi and Patparganj seats. Arvind Kejriwal is leading ahead of BJP's Sunil Kumar Yadav by a vote margin of 4387 votes. On the other hand, Manish Sisodia is leading by a margin of over 100 votes against BJP's Ravinder Singh Negi.

BJP's Tajinder Pal Bagga is now trailing behind Rajkumari Dhillon of AAP with a gap of 56 votes in West Delhi's Hari Nagar constituency. Bagga is contesting elections for the first time.

BJP’s Tajinder Pal Singh Bagga is leading in Hari Nagar constituency leaving behind AAP’s Rajkumari Dhillon and Congress’ Surendra Sethia. The margin is very slim, and counting of votes is still taking place. Bagga is known as one of the key supporters of Hindutva on social media platforms. Bagga came to limelight in 2011 when he rebuked SC lawyer Prashant Bhushan over his comment on Kashmir.

Have a look at which party trails and leads in key constituencies of Delhi:

AAP candidate Amanatullah Khan is trailing behind BJP's Brahm Singh. However, these are not the final results. The counting of votes is still underway in Okhla constituency. It will be crucial to watch Okhla Election Result 2020 as Shaheen Bagh and Jamia Nagar, the main base of anti-CAA Protests, are part of this constituency.

AAP candidate and Delhi's Deputy CM is trailing from Patparganj constituency. BJP's Ravinder Singh Negi is leading by a close margin as of now. 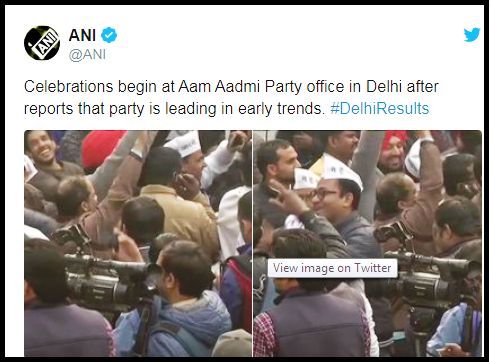 Congress' Chaudhry Mateen Ahmed is trailing in Seelampur constituency behind Kaushal Mishra of BJP and Abdul Rehman of AAP.

Have a look at the key constituencies & contesting candidates:

AAP is leading in Delhi with votes counted so far. AAP is leading with 33 seats, BJP is trailing with 10 seats and Congress is yet to open its account.

Delhi Chief Minister and AAP chief Arvind Kejriwal is contesting from New Delhi seat against Congress’ Romesh Sabharwal and BJP’s Sunil Kumar Yadav and. This seat was won by Kejriwal in 2015 Elections.