The two leaders also inaugurated the construction of the third and fourth dual gauge rail lines of Dhaka-Tongi section and Double Line on Dhaka-Joydevpur section of Bangladesh Railway. This railway project would not only help carry passengers but also transport goods.

Launch of construction of Indo-Bangla Pipeline Project through video conferencing

The project will go a long way in strengthening the Indo-Bangla ties. It is a new milestone in the history of cooperation between India and Bangladesh.

Both the sides had entered into an agreement for the construction of the pipeline in April 2018 during Foreign Secretary Vijay Gokhale's visit to Dhaka.

• The 130-kilometre pipeline will connect Siliguri in West Bengal in India and Parbatipur in Dinajpur district of Bangladesh.

• The capacity of the pipeline will be 1 million metric tons per annum.

• Bangladesh would initially receive 2.5 lakh tonnes of diesel every year and it would gradually be increased to 4 lakh tonnes.

• The project will replace the existing practice of sending diesel by rail covering a distance of 510 kilometers.

• The estimated project cost will be Rs 346 crore and it will be completed in 30 months time.

• This will be the first such pipeline through which refined diesel will be supplied to Parbatipur depot from Numaligarh of Assam in India. 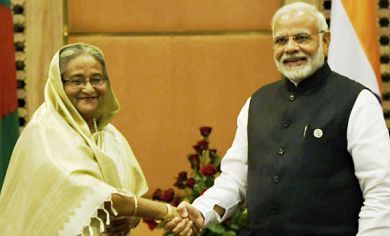 • The two leaders also inaugurated the construction of the third and fourth dual gauge rail lines of Dhaka-Tongi section and Double Line on Dhaka-Joydevpur section of Bangladesh Railway.

• Once the project gets completed, the train communication in the south-western region through Padma Bridge and in the northern region through Bangabandhu Jamuna Bridge, and on Chattogram-Sylhet routes from Dhaka would be easier and faster.

• A total of 96 kms of dual-gauge tracks along with other necessary infrastructures would be constructed from Kamalapur to Joydevpur railway stations under the project.

• This railway project would not only help carry passengers but also transport goods.