Pradhan Mantri Garib Kalyan Yojana has been extended till end of November. The government will continue to provide free ration to the poor under the scheme during the Indian festive season. 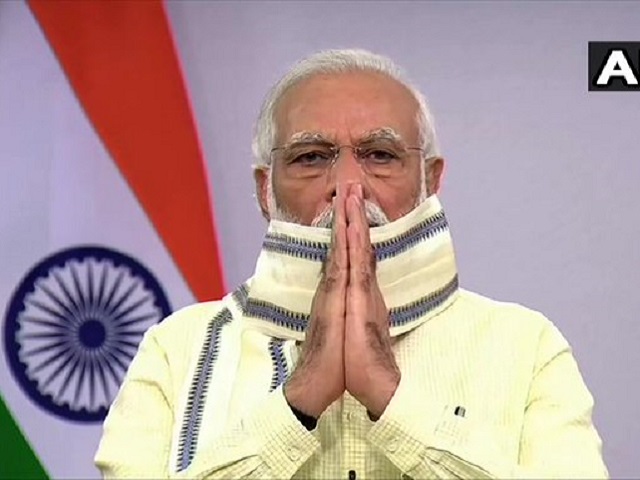 The Prime Minister assured that the government will continue to provide essential ration to the vulnerable families till after Diwali and Chhat Puja. The Prime Minister also announced extensive implementation of the 'One Nation, One Ration' card scheme to assist the migrant labourers.

PM Modi also urged citizens to be extra cautious during Unlock 2.0 and take adequate care of their health, especially since we are entering a season of cough, cold and fever. He also cautioned against negligence in personal and social behaviour, especially in containment zones and emphasised on the need to maintain 'do gaj doori' and use of masks.

We are entering #UNLOCK2 and the season of cough, fever and cold is also about to start. In such a situation, I urge countrymen to take care of themselves: PM Modi #COVID19 pic.twitter.com/fqchjpxbFw

The centre has decided to extend Pradhan Mantri Garib Kalyan Yojana till November end, till after Diwali and Chhat Puja. Under the scheme, the centre will provide free ration to approximately 80 crore people till November. The extension is expected to cost the government around Rs 90000 crore.

One Nation, One Ration Card

One nation, one ration card scheme to be implemented across the nation. The migrant labourers will be able to benefit from the initiative. PM Modi said that the government is able to provide free food grains to the poor all due to the efforts of the Indian farmers and taxpayers.

Today, if the government is able to provide free food grains to the poor & the needy, the credit goes to two sections. First, the hardworking farmers of our country and second, the honest taxpayers. I thank you from my heart: PM Modi pic.twitter.com/sxrTc1DsZw

India is still comparatively stable in dealing with Coronavirus situation in comparison to other countries across the globe. The Prime Minister reiterated that timely decisions and measures have played a great role in this.

In comparison to other countries across the globe, India is still in a very stable situation, in the battle against #COVID19. Timely decisions and measures have played a great role: Prime Minister Narendra Modi pic.twitter.com/QYEVFqgWxM

The Prime Minister noted that since the beginning of Unlock 1, negligence in personal and social behaviour has been increasing. PM Modi urged the citizens to be more cautious and emphasised on the need to continue maintaining  'do gaj doori', wearing of face masks and repeated washing of hands, especially in the containment zones.

During lockdown, rules were strictly abided by. Now, govts, local administration and citizens again have to show similar caution. We need to have a special focus on containment zones. If you see someone flouting norms, tell them to not do so: PM Modi #COVID19 pic.twitter.com/vP9pRao83j

The new MHA guidelines have been formed based on the feedback received from the states/ UTs and extensive consultations between central ministries and departments.

Ahead of his national address, Prime Minister Narendra Modi chaired a high-level meeting today to review the preparations being undertaken for COVID-19 vaccination as and when a vaccine is available.

Delhi: Prime Minister Narendra Modi today chaired a high-level meeting to review the preparations being undertaken for vaccination against #COVID19, as and when a vaccine is available. pic.twitter.com/HaAOIKX2wp

The Prime Minister had last addressed the nation through his monthly programme 'Mann Ki Baat' on June 28, in which he talked about India's ongoing border dispute with China, saying that befitting reply has been given to those coveting India's territories.

The centre in a digital retaliation against China also banned 59 major Chinese apps on June 29, 2020 stating them to be a threat to India's sovereignty and integrity and security of state and public. The banned apps include popular mobile apps such as Tik Tok, WeChat, Cam Scanner, Beauty Plus, Shareit and sites like Shein and Club Factory.