‘Queen of Thumri’ Girija Devi passes away at 88

Indian classical singer Girija Devi, who was the recipient of India’s second highest civilian honour-Padma Vibhushan, passed away at the age of 88 in Kolkatta after suffering from a cardiac arrest. The eminent singer, considered as the Queen of Thumri, is survived by a daughter. 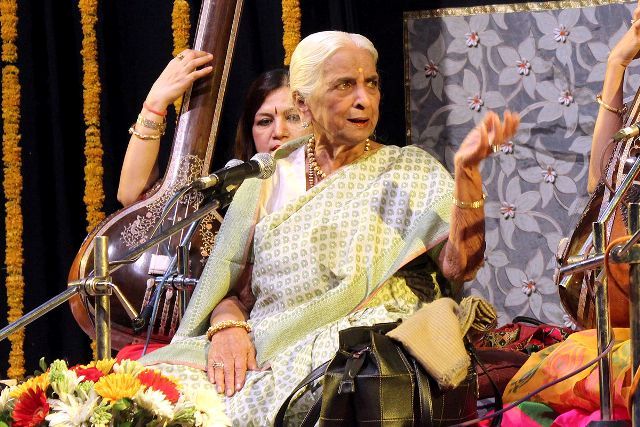 ‘Queen of Thumri’ Girija Devi passes away at 88

Indian classical singer Girija Devi, who was the recipient of India’s second highest civilian honour-Padma Vibhushan, passed away on 24 October 2017 in Kolkatta after suffering from a cardiac arrest. She was 88.

The eminent singer was taken to the city's BM Birla Heart Research Centre on the same day with cardiovascular ailments and was put on life support. Her condition was very critical when was brought to the hospital and was admitted straight to the CCU and kept under constant watch.

Popularly considered as the Queen of Thumri, Devi is survived by a daughter.

• Her father played the harmonium and taught music, and had Devi take lessons in singing khyal and tappa from vocalist and sarangi player, Sarju Prasad Misra, starting at an early age of five years.

• She performed classical and light classical music and helped elevate the profile of thumri.

• She starred in the movie ‘Yaad rahe’ at the age of nine.

• She made her public debut in 1949 on All India Radio in Allahabad.

• She also worked as a faculty member at the ITC Sangeet Research Academy in Kolkata in the 1980s and at the Banaras Hindu University during the early 1990s.

• Her music collection included the semi-classical genres including kajri, chaiti, and holi and she sang khyal, Indian folk music and tappa.

• She won three civilian awards throughout her illustrious career. She won the Padma Shri in 1972, the Padma Bhushan in 1989 and the Padma Vibhushan in 2016.

Prime Minister Narendra Modi condoled Devi’s death by saying that the singer’s music appealed across generations and her pioneering efforts to popularise Indian classical music would always be remembered.

No need to stand up in movie halls to prove patriotism: SC