Jack Dorsey case: Rajasthan High Court ordered a stay on the FIR registered against Twitter CEO Jack Dorsey on April 7, 2020. The FIR was filed against Dorsey in 2018 during his India trip for reportedly hurting the sentiments if the brahmin community.’

The Rajasthan High Court quashed the plea against Dorsey stating that it did not find the offence in the petition filed against Dorsey and a journalist and said that allowing the investigation in the matter by police was absolutely uncalled for.

Jodhpur Court had ordered the police to register an FIR against Dorsey. 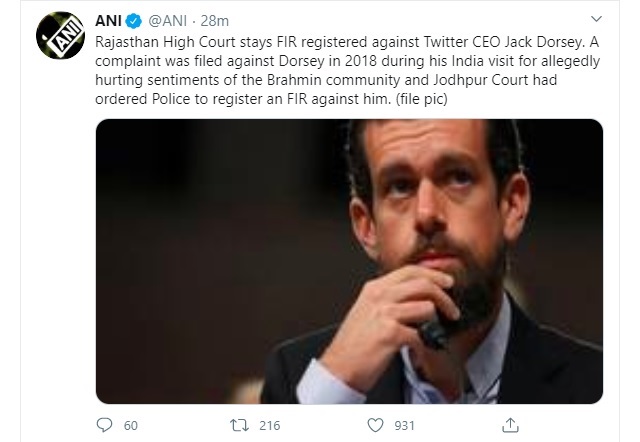 •  The court observed that the FIR did not furnish the required details of any cognizable offence to warrant its registration and investigation.

•  The court further, referring to the slogan described as offensive, noted that the words could not be taken as having any direct link with the religious sentiment of any section of the society.

•  The court noted that the words on the poster best convey that the feelings of the person concerned is strongly opposed to the brahminical patriarchial system and desires to denounce the same.

Jack Dorsey and journalist Anna MM Vetticad had moved the Rajasthan High Court earlier with a Criminal Miscellaneous petition, seeking to quash the FIR. However, the court did not quash the petition but it ordered a stay on his arrest.