Ravindra Jadeja has become the fastest left-arm bowler to take 200 wickets, ahead of Pakistan’s Wasim Akram.

Ravindra Jadeja has become the second fastest Indian to take 200 wickets in Test cricket. Jadeja achieved the feat when he bowled out Dean Elgar during the Day 3 of India’s first test against South Africa in Visakhapatnam.

Jadeja is only behind off-spinner R Ashwin who took 37 test matches to enter the 200-wicket club. Jadeja reached the feat in 44 tests.  Veteran Indian spinners, Harbhajan Singh and Anil Kumble had taken 46 and 47 matches respectively to reach the milestone. 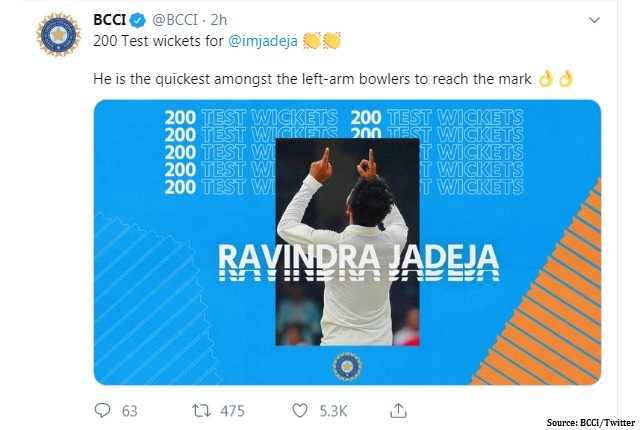 The Indian All-rounder broke the records during the third day of India’s first test against South Africa. South Africa was playing its first innings after India declared at 502 for 7.

The wicket that helped Jadeja achieve the great feat was of Dean Elgar, who was looking solid on the field having scored 160 runs. With Elgar’s wicket, Jadeja gave India the much-needed breakthrough, besides creating new records.

India had put up a massive total of 502 runs in the first innings and got early breakthroughs by taking down three important wickets and reducing South Africa at 39 for three at the close of Day 2.

While many thought it to be a walkover for the hosts, the Proteas proved it otherwise with a brilliant show by Dean Elgar, who dominated over the Indian bowlers until Jadeja got the better of him.

Elgar misread Jadeja’s delivery and top-edged it and Cheteshwar Pujara in a brilliant display of fielding made no mistake and dived forward to grab the catch.