Russia has vetoed a UN resolution that was to extend the work of international inspectors to determine who was behind the chemical weapons attacks in Syria. The chemical attack, which took place on 4 April 2017 on a town in violence-hit Syria- Khan Sheikhoun, had lead to the killing of many civilians. 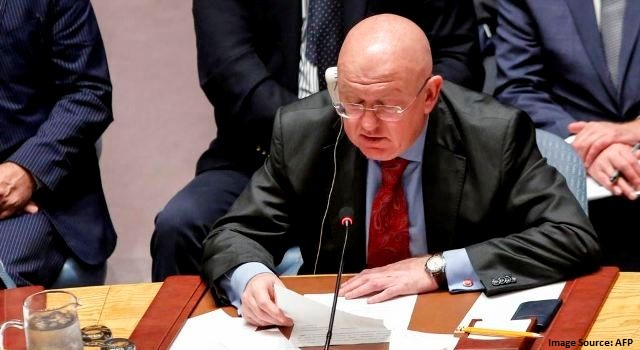 Russia on 24 October 2017 used its veto power on the United Nations Security Council to block a UN resolution that would extend the work of international inspectors to determine who was behind the chemical weapons attacks in Syria.

The chemical attack, which took place on 4 April 2017 on a town in violence-hit Syria- Khan Sheikhoun, had lead to the killing of many civilians. The attack was an instance of the deadliest use of chemical weapons in the Syrian civil war since the Ghouta chemical attack in 2013.

Russia vetoed the US-backed resolution accusing the United States of calling the vote to dishonour Russia.

The veto decision was condemned by the United States, Britain and other countries, which saw it as an attempt to shield those responsible for answering to the most controversial human rights abuses in Syria’s six-year war history.

• The UN resolution to extend the investigation received 11 yes votes, 2 no votes from Russia and Bolivia and two abstentions.

• The veto will now prevent the inspectors from investigating the chemical attacks unless a new agreement is struck to extend them before mid-November.

• Russia had been pushing to postpone the vote on the extension of the investigation but could not get enough support and used its veto power instead to block the adoption.

• It was the 9th time Russia has used its veto power to hinder a UN action on Syria. Moscow is a key ally of the Bashar al-Assad-led Syrian government.

The UN investigative body, Joint Investigative Mechanism, would be releasing a report attributing blame for the April 4 chemical attack on 26 October 2017.

• Deadly chemical attacks during the Syrian Civil War include the Ghouta attack in Damascus in August 2013 and the Khan al-Assal attack in Aleppo in March 2013.

• Chlorine bombs were dropped on the towns of Talmenes in April 2014 and Sarmin in March 2015.

• Another form of chemical, sulfur mustard was reported to be used in the town of Marea in August 2015.

• In December 2016, at least 53 people were killed in a nerve gas attack in IS-held villages near Uqairabat.

• In April 2017, Syria’s Khan Shaykhun town was reported to have been struck by an airstrike that was followed by a massive civilian chemical poisoning.