Left arm medium fast bowler, Ashish Nehra has announced retirement from all forms of international and domestic cricket. Nehra will be playing his last match T20 International against New Zealand on 1 November 2017 at the Feroz Shah Kotla Ground, Delhi. 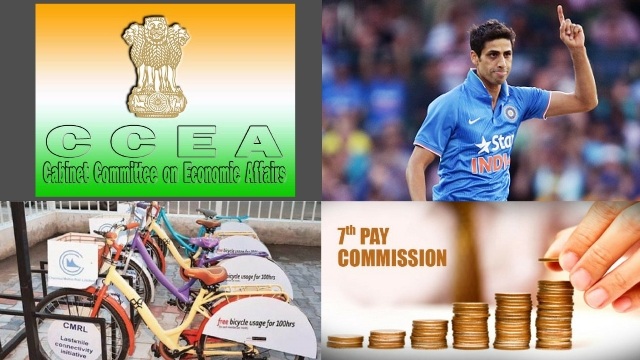 The Union Cabinet has approved signing of Memorandum of Cooperation (MoC) between Japan and India on the 'Technical Intern Training Program (TITP)'. The programme is an ambitious one that involves sending of one lakh Indian technical interns to Japan for on the job training for a period of 3-5 yrs.

Ashish Nehra bids adieu to all forms of cricket

Ashish Nehra on 11 October 2017 announced retirement from all forms of international and domestic cricket. Nehra will be playing his last match T20 International (T20I) against New Zealand on 1 November 2017 at the Feroz Shah Kotla Ground, Delhi.

Left arm medium fast bowler Nehra will also retire from the Indian Premier League, which played a huge role at his international comeback in 2016. He made his cricket debut in 1999 under Mohammed Azharuddin in India and made his international debut in a Test match against Sri Lanka in Colombo in February 1999.

SANKALP is Rs 4455 crore centrally sponsored scheme including Rs 3300 crore loan support from World Bank whereas STRIVE is a Rs 2200 crore central sector scheme with half of the scheme outlay as World bank loan assistance.

The Chennai Metro Rail, CMRL has introduced a free bicycle ride scheme for its customers. The metro corporation has tied up with a private agency to provide 100-hours of bicycle ride free of cost every month.

The initiative is an effort towards providing last-mile connectivity service to passengers in order to help promote eco-friendly travel in the city. The move is expected to reduce dependence on private vehicles and provide a more economical option to the travelers.

The users would be able to avail 100 hours of free bicycle ride under the condition that the cycle is returned within 24 hours.

The Tamil Nadu Cabinet has approved the implementation of the Seventh Pay Commission recommendations to benefit the state government employees and teachers.

The implementation of 7th Pay Commission in the state is set to benefit more than 10 lakh staff and teachers apart from pensioners and those receiving family pension. With the development, the salaries of the state government employees and teachers will reportedly increase by 20 per cent.