The Union government has constituted a high-level committee for proper management of the water resources in the North Eastern Region (NER).The committee would be headed by the Vice-Chairman of Niti Aayog. It would mainly facilitate optimising benefits of appropriate water management in the form of hydro-electric power, agriculture, bio-diversity conservation and eco-tourism. 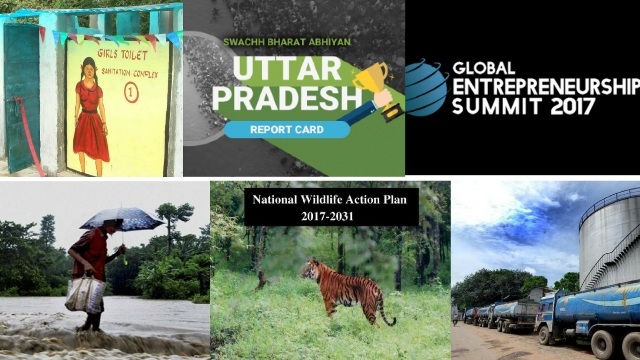 The Union government has constituted a high-level committee for proper management of the water resources in the North Eastern Region (NER).

The move follows Prime Minister Narendra Modi’s visit to Guwahati in August 2017 to review the flood situation and relief work in the North Eastern States.

UP tops all states by building 3.2 lakh toilets in 17 days

The Uttar Pradesh government on 3 October 2017 stated that it has built over 3.52 lakh toilet units in 17 days under the Centre's Swachhta hi Seva campaign thereby, topping other states in the  effort. The toilets were constructed between 15 September and 2 October.

Following UP in the effort is Rajasthan, which constructed around 2, 54,953 toilets and then Karnataka, which built around 2, 41,708 toilets in the same period. Overall, almost 18, 24,549 toilets were constructed across states, according to a statement issued by the office of chief secretary Rajive Kumar.

Global Entrepreneurship Summit 2017 to be held in Hyderabad

The eighth annual Global Entrepreneurship Summit (GES) 2017 will be held in Hyderabad, India from 28 to 30 November 2017.

The theme for this year summit is “Women First, Prosperity for All” to celebrate the entrepreneurial spirit in all its strengths and diversity. This year, the focus will be on women entrepreneurs and the incredible potential women bring to entrepreneurship.

The Summit will be inaugurated by the Prime Minister Narendra Modi and Advisor to the POTUS (President of the US) Ivanka Trump, who will lead the US delegation.

With 6 per cent growth, India to surpass China as fastest-growing oil market in Asia

India will outshine China as the fastest-growing petroleum product market in Asia on the back of a 6 per cent demand growth says a report.

This seems possible as Chinese stipulated growth is seen halving to 2.5-3% in 2017-18 from a higher 6% in 2016-16. Despite the failing growth numbers in both these countries, India and China will maintain to be the key growth engines for the sector in Asia, representing over 80% of the expected growth in 2018.

The Third National Wildlife Action Plan for 2017-2031 was unveiled by India spelling out the future road map for wildlife conservation.

The Plan is based on the foundation that ecological processes that are governed, supported or strongly moderated by ecosystems are essential for food production, health and other aspects of human survival and sustainable development.

So, maintenance of these ecosystems that can be termed as ‘Life Support Systems’ is vital for all societies regardless of their stage of development.