US President Donald Trump rejected the United Nations' 2013 Arms Trade Treaty aimed at regulating the global arms trade. The treaty seeks to regulate the flow of weapons into conflicted zones. It requires member countries to keep records of international transfers of weapons and to prohibit cross-border shipments that can be used in human rights violations or attacks on civilians. 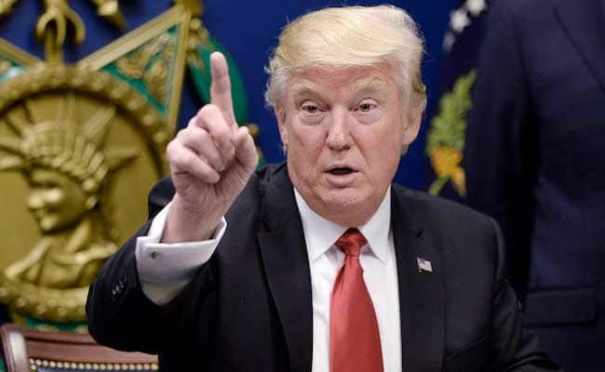 Trump states, “We will never allow foreign bureaucrats to trample on your Second Amendment freedom”.

Trump said that the US Senate never ratified the 2013 Arms Trade Treaty despite his predecessor Barack Obama having endorsed it. The US President also made it clear that he will never ratify the treaty.

President Trump's decision to un-sign the Arms Trade Treaty is the latest illustration of his aversion to international pacts and world governance. Have a look:

1. US pulls out of UN’s migrant and refugee pact

The United States has withdrawn itself from a United Nations pact to improve the handling of migrant and refugee situations deeming it ‘inconsistent’ with its immigration policies.

2. US President Donald Trump signs executive order to pull US out of TPP

Donald Trump signed an executive order on January 23, 2017, immediately after his accession to power, to formally pull the country out of the negotiating process of the Trans-Pacific Partnership (TPP), one of the major international trade initiatives of Barack Obama. Trump felt the partnership to be harmful to American workers and manufacturing.

3. Trump announces US withdrawal from Paris Agreement on Climate Change

President Donald Trump announced on June 1, 2017 that he would withdraw the United States from the landmark 2015 Paris agreement to fight climate change, stating that the accord would undermine US economy, cost US jobs, weaken American national sovereignty and put the country at a permanent disadvantage to the other countries of the world.

4. US withdraws from UNESCO

The United States and its ally Israel announced on October 12, 2017 that they were pulling out of the UN's culture and education body, UNESCO, accusing it of anti-Israel bias.

The United States Federal Communications Commission voted along party lines on December 14, 2017 to repeal the 2015 Open Internet Order which protects net neutrality in the United States.

6. US withdrawal from Iran nuclear deal

The President Donald Trump on May 8, 2018 announced US withdrawal from the landmark 2015 nuclear deal with Iran. Trump stated that the 2015 agreement, which included Germany, France and Britain, was a "horrible one-sided deal that should never ever have been made."

Nikki Haley, the US Permanent Representative to the United Nations, on June 19, 2018 announced the US withdrawal from the United Nations Human Rights Council (UNHRC). However, Haley asserted that United States will continue to promote human rights outside of the council and would consider rejoining it in the future, if reforms are made.

8. US to end India's preferential trade treatment under GSP programme

Trump informed the US Congress on March 4, 2019 that he intends to end India's preferential trade treatment under the Generalised System of Preferences (GSP) programme. The GSP programme allows USD 5.6 billion worth of Indian exports to enter the United States duty-free.

9. US pulls out of Intermediate-Range Nuclear Forces treaty with Russia

Trump announced on February 1, 2019 that the United States will pull out of the three-decade-old Intermediate-Range Nuclear Forces (INF) treaty, which it had signed with Russia during the Cold War.

Story 2: US imposes sanction on Pakistan; may deny visas to Pakistanis

The United States on April 26, 2019 imposed sanctions on Pakistan after the nation refused to take back its citizen deportees and visa over-stayers from America.

As a result of such sanctions, mentioned in a Federal Register notification dated April 22, the US may withhold visas of Pakistanis beginning with its senior officials.

However, the consular operations in Pakistan will continue as of now.

Impact of such sanctions on Pakistan

Hussain Haqqani, former Pakistan’s Ambassador to the US, believes that the sanctions will make things difficult for Pakistanis.

It will create difficulties for Pakistanis who want or need to travel to the US. Such a situation could have been avoided if Pakistani authorities had not ignored American requests to respect their legal requirements for deportation.