The World Day against Child Labour is being observed across the world today, on June 12, 2019. The theme of the day this year is, 'Children should not work in fields but on dreams'.

The World Day against Child Labour was established by the International Labour Organization (ILO) in 2002 to focus attention on the global extent of child labour and the action and efforts needed to eliminate it. The day brings together governments, employers and workers organizations, civil society as well as millions of people to highlight the plight of child labourers and measures to help them.

This year, the International Labour Organization is celebrating 100 years of advancing social justice and promoting decent work. The day looks towards the UN Sustainable Development Goal Target 8.7 set by the international community calling for an end to child labour in all its forms by 2025.

Various discussions and debates will take place on the day, which will focus on major transformations being experienced in the world of work, whether the result of technology, environmental or demographic and what this means for the youngest in society.

The discussions will also focus on accelerating action towards SDG Target 8.7, entailing the ratification and implementation of fundamental ILO labour standards and compliance in law and practice. 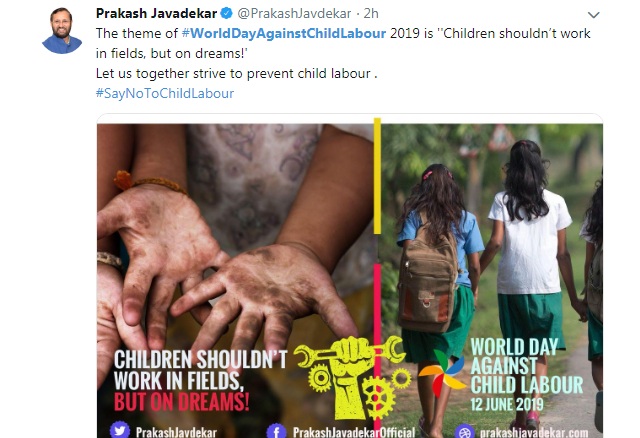 What is Child Labour?

The ILO describes the term child labour as work that deprives children of their childhood, their potential and their dignity, and that is harmful to physical and mental development.

All work is, however, not child labour, the ILO states that activities that contribute to the positive development of children like doing their share of household chores or earning pocket money in summer is not considered as child labour.

Child labour, in particular, refers to work that:

• Is mentally, physically, socially or morally dangerous and harmful to children

• Interferes with their schooling by depriving them of the opportunity to attend school, obliging them to leave school prematurely or requiring them to attempt to combine school attendance with excessively long and heavy work.

Despite efforts to curb child labour, around 152 million children across the world are still in child labour. Though it occurs in almost all sectors, 7 out of every 10 of these children are working in agriculture.

In India, around, 12 percent of all children are engaged in some form of child labour, as per the data released by UNICEF in 2017. Hundreds of children drop out of school every year to help their parents earn a livelihood.

Many children are also forced to work in dangerous situations by organised crime rackets.