The day has been observed every year on April 28 to stress on the prevention of accidents and diseases at work. 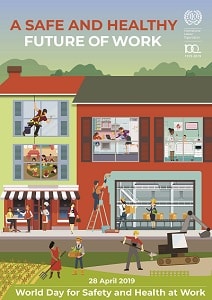 World Day for Safety and Health at Work observed

Story 1- World Day for Safety and Health at Work observed

The World Day for Safety and Health at Work was observed across the globe on April 28, 2019. The day is observed annually to promote safe, healthy and decent work.

This year, the world day attempts to take stock of a 100 years of work in improving occupational safety and health and looks to the future for continuing these efforts through major changes such as technology, demographics, sustainable development including climate change and changes in work organisation.

The World Day celebration on April 28 will be only the beginning of worldwide events and activities to continue throughout the rest of the year.

The new and emerging occupational risks may be caused by technical innovation or by social or organizational change such as:

• New technologies and production processes such as nanotechnology, biotechnology

• New working conditions like higher workloads, work intensification from downsizing, poor conditions associated with migration for work and jobs in the informal economy

• Emerging forms of employment such as self-employment, outsourcing, temporary contracts

A national occupational safety and health culture is one in which the right to a safe and healthy working environment is respected at all levels, where governments, employers and workers actively participate in securing a safe and healthy working environment through a system of defined rights, responsibilities and duties and where the highest priority is accorded to the principle of prevention.

The United States on April 25, 2019 yet again placed India on its ‘Priority Watch List’, alleging lack of sufficient measurable improvements to its Intellectual Property (IP) framework on long-standing and new challenges, which has negatively affected American right holders over the past year.

• In its report, the US said that these countries will be the subject of increased bilateral engagement with the USTR to address Intellectual Property (IP) concerns.

• Over the coming weeks, the USTR would be reviewing the developments against the benchmarks established in the Special 301 action plans for countries that have been on the ‘Priority Watch List’ for multiple years.

• For countries that fail to address US’ concerns, the USTR will take appropriate actions, such as enforcement actions under Section 301 of the Trade Act or pursuant to World Trade Organisation or other trade agreement dispute settlement procedures, necessary to combat unfair trade practices and to ensure that trading partners follow through with their international commitments.

The Report’s observations for India

• In its India section of the report, the USTR said that long-standing IP challenges facing US businesses in India include those which make it difficult for innovators to receive and maintain patents in that country, particularly for pharmaceuticals, insufficient enforcement actions, copyright policies that do not properly incentivise the creation and commercialisation of content, and an outdated and insufficient trade secrets legal framework.

• In addition to these long-standing concerns, the report alleged that India also further restricted the transparency of information provided on state-issued pharmaceutical manufacturing licenses, and expanded the application of patentability exceptions to reject pharmaceutical patents.

• India also missed an opportunity to establish an effective system for protecting against the unfair commercial use, as well as the unauthorised disclosure, of undisclosed test or other data generated to obtain marketing approval for certain agricultural chemical products.

• According to the USTR, last year it engaged with India to secure meaningful IP reforms on long-standing issues, including patentability criteria, criteria for compulsory licensing and protection against unfair commercial use, as well as unauthorised disclosure, or test of other data generated to obtain marketing approval for pharmaceutical products.

• In a warning to India and various other countries, the USTR said that to maintain the integrity and predictability of IP systems, governments should use compulsory licenses only in extremely limited circumstances and after making every effort to obtain authorisation from the patent owner on reasonable commercial terms and conditions.

• Further, USTR stated that such licenses should not be used as a tool to implement industrial policy, including providing advantages to domestic companies, or as undue leverage in pricing negotiations between governments and right holders.

• It added that it is also critical that foreign governments ensure transparency and due process in any actions related to compulsory licenses.

• The report revealed that the United States will continue to monitor developments and to engage, as appropriate, with trading partners, including India.

• It also stated that in India, rulings by government agencies are attempting to extend the scope of mandatory collective management of rights and statutory license fees for certain types of digital music services.

• It also added that the collection and distribution of royalties to US and other right holders should be carried out on a national treatment basis.

• At the same time, the report also notes some of the best practices by India in the IP sector in 2018. For instance, India’s Cell for Intellectual Property Rights Promotion and Management (CIPAM) organises and spearheads the government’s efforts to simplify and streamline IP processes, increase IP awareness, promote commercialization and enhance enforcement.

• The USTR said India has yet to take steps to address long-standing patent issues that affect innovative industries.

In the pharmaceutical and agricultural chemical sectors, India continues to lack an effective system for protecting against the unfair commercial use, as well as the unauthorised disclosure, of undisclosed test or other data generated to obtain marketing approval for such products.