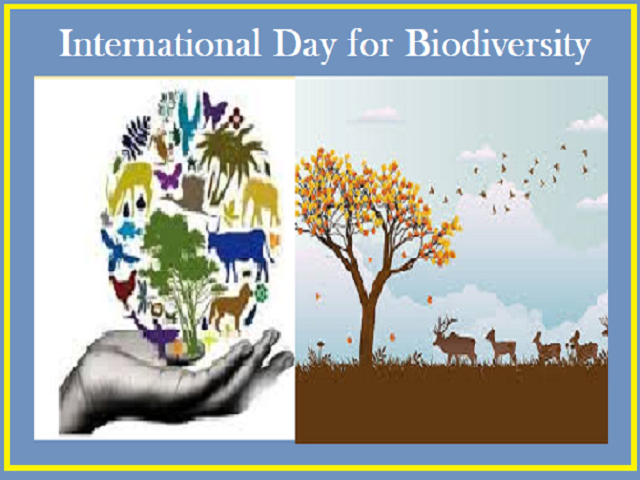 "As we encroach on nature and deplete vital habitats, increasing numbers of species are at risk. That includes humanity and the future we want." - UN Secretary-General Antonio Guterres

There is an indissoluble connection between nature and human life. We are dependent on healthy, diverse natural systems for our food and health to a staggering extent. Therefore, 22 May has been observed as International Day of Biodiversity to raise awareness about several biodiversity issues. On 29 December, 1993 it was first created by the Second Committee of the UN General Assembly. Since 2001, it is celebrated every year.

Nature has given everything, we, in fact, take benefits from nature but mostly we take it granted. IPBES monthly report says that to save ourselves it is necessary to conserve nature. It's an urgent requirement. The day is also celebrated to thanks nature and what all it brings to us.

Biodiversity is generated from two words "biological" and "diversity". It refers to all the variety of life that can be found on Earth-like plants, animals, fungi and micro-organisms. Also, it refers to the communities that they form and the habitats in which they live.

In the article 2 of the Convention on Biological Diversity, a formal definition of Biological diversity is mentioned: It means the variability among living organisms from all sources including inter alia, terrestrial, marine and other aquatic ecosystems and the ecological complexes of which they are part; this includes diversity within species, between species and of ecosystems.

So, we can say that Biodiversity is the combination of life forms and their interactions with each other and with the rest of the environment that has made Earth a uniquely habitable place for humans. No doubt biodiversity provides a large number of goods and services that sustain our lives.

What is the Grassland Ecosystem?

The theme of the International Day of Biological Diversity (IDB) 2020 is: "Our solutions are in nature".

The whole community in the world in spite of technological advances are totally dependent on healthy ecosystems for our health, water, food, medicines, clothes, fuel, etc. The 2020 theme focuses on hope, solidarity and the importance of working together or to come together to build a future of life in harmony with nature. The year 2020 is a year of reflection, opportunity and solutions. It is our duty to "Build Back Better" by using the time to come up, build nations and communities as we recover from COVID-19 pandemic. It is necessary to build a global framework that will "bend the curve" on biodiversity loss as it will benefit humans and all life on Earth.

The theme of International Day of Biological Diversity 2019 was “Our Biodiversity, Our Food, Our Health”. It focuses on to spread knowledge and awareness about the dependency of the food system, nutrition, health on biodiversity and on healthy ecosystems.

The theme also put an emphasis on the food and health as a key catalyst in transforming the system of food and to improve human well-being.

Things that will be beneficial that you can do for the conservation of Biodiversity:
- Reduce the consumption of meat
- Eat and purchase seasonal food
- Buy local foods
- Reduce wastage of food
- Compost food scraps
- Reduce the packaging of food by using reusable bags or reusing glass jars or containers.
- Avoid using plastics like a plastic straw, coffee cups, glasses, water bottles, etc.
- It is necessary to promote local and indigenous biodiversity for food and nutrition.

International Day for Biodiversity (IDB): History
In 1992, at the United Nations Conference on Environment and Development which is also known as "The Earth Summit" in Rio de Janeiro, Brazil, state and government leaders agreed on a strategy for sustainable development. It is said that sustainable development is a way to meet the needs of the people around the world and it will ensure that planet Earth healthy for the future generation. In the Earth Summit, one of the most agreements was the Convention on Biological Diversity.

This Convention came into force on 29 December, 1993 and designated the International Day for Biological Diversity. From 2001, it was celebrated on 22 May. In 1992, the text of the Convention on Biological Diversity was adopted at a United Nations at a conference in Nairobi, Kenya. Each year, International Day for Biodiversity focuses on a particular theme and celebrate it accordingly.

How is International Day for Biological Diversity (IDB) celebrated?

On this day, in the whole world, various events are organised to make people understand the importance of biodiversity and what role it plays for the future. The Secretariat of the Convention on Biological Diversity organises celebrations every year which forms the part of the United Nations Environmental Programme. Several national governments and non-governmental organisations also participate in the celebrations. Activities that took place are:
- Various booklets, leaflets and other educational resources are translated into local languages.
- A lot of information is distributed on biodiversity via schools, colleges, universities, newspapers, radio and television.
- Movies are also shown on environmental issues.
- Exhibitions and seminars are also organised for students, professionals and also for the general public.
- Several programs are presented which focus on how to preserve endangered species or habitats.
- Planting trees and other plants at several places that help to prevent erosion.

Also, politicians may give speeches mainly focussing on local environmental issues, competitions for children and young people to take photographs or create artwork centred on the annual theme are also conducted. Due to COVID-19, this year celebration goes online.

Let us see now why is Biodiversity important?

Biodiversity boost ecosystem where each species no matter big or small, all have an important role to play. Like a large number of plant species means a greater variety of crops, diversity in greater species ensures natural sustainability for all life forms and a healthy ecosystem can better withstand and recover from a variety of disasters.
A Healthy ecosystem provides:
- Soil formation and protection
- Protection of water resources
- Pollution breakdown and recycling
- Contribution to climate stability
- Maintenance of ecosystems

So, we can say that biodiversity is the term given to the variety of life on Earth and the natural patterns it forms. No doubt biodiversity that we see today is the evolution of billions of years of fruits, shaped by natural processes and increasingly, by the influence of humans. It is an integral part of life on which we depend.

What is the Global Environmental Facility (GEF)?