Terrorism is a threat of violence that creates fear in a population. It is also important to understand that all violent acts are not terrorist acts. In this article, we are providing some of the deadly terror attacks that our nation has witnessed. 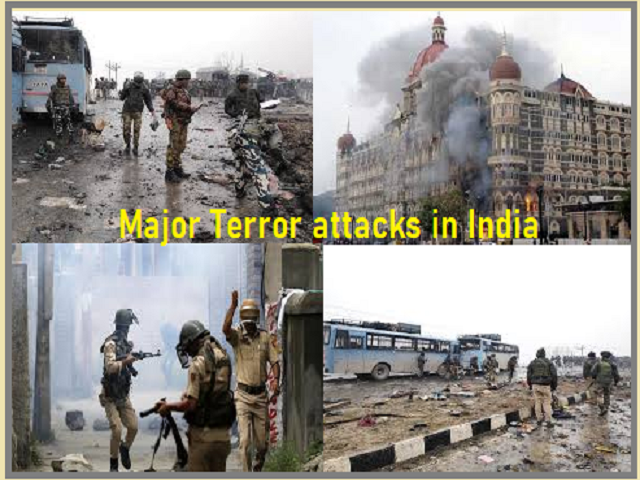 Our nation has witnessed several terror attacks so far. Terrorism not only paved an impact on the life and property but also create fear in the population. It is also difficult to distinguish terrorism from other forms of political violence and violent crime including as state-based armed conflict, non-state conflict, one-sided violence, hate crime, homicide etc. The lines between these different forms of violence are still not clear and are often blurry.

It is said "Terrorists have no religion. They only understand the language of devastation".

On 14 February, 2019, one of the deadliest terror attacks on our brave security forces in Pulwama, Jammu and Kashmir shocked the Nation. In the attack at least 40 CRPF personnel were killed. An explosive-filled vehicle was rammed by a Jaish-e-Mohammed (JeM) terrorist on a bus ferrying CRPF jawans. The bus was a part of the CRPF convoy. At CRPF's Lethpora camp near the site where the terror attack took place, the memorial has been erected to pay respect and to commemorate memories of soldiers who paid the ultimate price.

On 18 September 2016, the worst attack on Army, heavily armed militants suspected to be from Pakistan-based JeM stormed an army base in Uri in Kashmir where 17 jawans were killed. The Army base was located barely a few kilometres from the Line of Control (LoC) and some 70 km from Srinagar and was attacked by four terrorists. It caused heavy casualties in the Dogra regiment. 20 more army personnel were injured. After around three-hour gun battle, four terrorists were killed.  The attack was reported as the deadliest attack on security forces in Kashmir in two decades.

According to the Army statement "A group of heavily terrorists targeted the rear administrative base of a unit at Uri, Kashmir". There have been a total of 17 Army fatal casualties. Of these, 13-14 casualties have been due to these tents/shelters having caught fire”.

Nearly about 10 days, the Indian Special Forces carried out surgical strike on seven terror launchpads along the LoC in Pakistan-occupied Kashmir.

It is also one of the most horrific attacks in the country's history. On 26 November, 2008, 10 heavily-armed terrorists from Pakistan LeT based created mayhem in Mumbai in which around 166 people lost lives and over 300 were injured. It was a coordinated shooting and bombing attacks in Mumbai at five major locations.

Again nation was shocked by the terrorist’s attack that took place on 13 May, 2008 in Pink city Jaipur. Series of nine bomb blasts in a span of 15 minutes in which around 80 people were killed and more than 170 were injured.

A series of seven blasts took place over a period of 11 minutes on 11 July, 2006 during evening rush hour on the Suburban Railway in Mumbai (earlier known as Bombay), the capital city of Maharashtra. In the blasts around 209 people lost their lives and over 700 were injured. Perpetrators were terrorist outfits- Student Islamic Movement of India (SIMI), Lashkar-e-Taiba (LeT).

On 29 October, 2005, a series of bomb blasts in Delhi, the national capital in which around 66 persons lost lives and more than 200 were injured. Crowd markets and some city areas were targetted. The blasts took place in Sarojini Nagar, Paharganj and a Delhi Transport Corporation (DTC) bus in Govindpuri. The blasts of 2005 were linked with a terrorist group of LeT. It was said that the serial explosions that rocked Delhi in 2005 were the biggest terrorist strike in India, outside Kashmir, since the 1993 blasts in Mumbai.

According to one estimate, at least 25 blasts in Delhi took place since 1997. Even, in May, 2005, one person was killed and 60 were injured in two explosions at two cinemas.

On 13 December, terrorists of Lashkar-e-Taiba (LeT) and the Jaish-e-Mohammed (JeM) attacked the Parliament complex and opened fire in which around nine people were killed.

According to the reports, a note, along with three AK-47 rifles, magazines and UBGL grenades, was recovered from the site of the attack. The victims were 5 Delhi police personnel, a woman Central Reserve Police Force (CRPF) trooper, 2 Parliament watch and ward staff and a gardener. A journalist who was injured died later. All five terrorists were shot dead.

On 12 March, 1993, a series of bomb explosions in Mumbai (Earlier Bombay) took place which resulted in the death of around 257 persons and more than 700 persons were injured and destruction of properties worth more than Rupees 27 crores. Dawood Ibrahim was the main accused in the 1993 serial bomb blasts case in Mumbai. A series of 13 bomb explosions took place that brought the city's most iconic buildings to their knees, the Bombay Stock Exchange.

Various other terror attacks are also witnessed by India that took several lives and made people injured. Mentioned above are some of the deadly terror attacks that made India into shook.